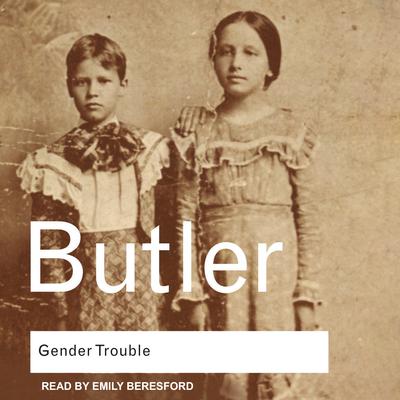 Gender Trouble: Feminism and the Subversion of Identity

One of the most talked-about scholarly works of the past fifty years, Judith Butler's Gender Trouble is as celebrated as it is controversial.

Arguing that traditional feminism is wrong to look to a natural, "essential" notion of the female, or indeed of sex or gender, Butler starts by questioning the category "woman" and continues in this vein with examinations of "the masculine" and "the feminine." Best known however, but also most often misinterpreted, is Butler's concept of gender as a reiterated social performance rather than the expression of a prior reality.

Thrilling and provocative, few other academic works have roused passions to the same extent.

“Among the two or three most influential books (and by far the most popular) in the field of gender studies…A primer in gender studies—and sexy reading for college cafés.” —Amazon.com
“Reshapes the categories through which we experience and perform our lives and bodies. To be troubled in this way is an intellectual pleasure and a political necessity.” —Donna J. Haraway, author of Staying with the Trouble

Judith Butler is the Maxine Elliot Professor in the departments of rhetoric and comparative literature at the University of California, Berkeley. She is the author of Gender Trouble, The Psychic Life of Power, Excitable Speech, Bodies That Matter, and Frames of War.