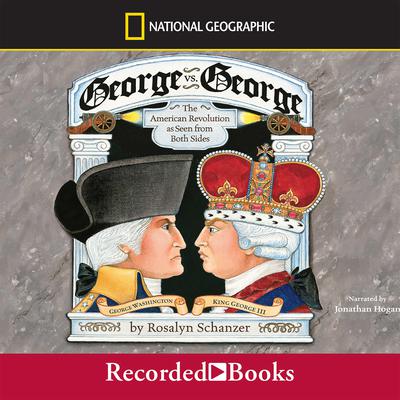 George vs. George: The American Revolution as Seen from Both Sides

George Washington and King George III of Britain had a great deal in common-aside from sharing the same first name. Both loved to hunt and farm, both towered above most other men of their day, and both were dedicated husbands and fathers. Yet despite their similarities, they were destined to become bitter enemies. As the Revolutionary War erupted, people on opposite sides of the Atlantic Ocean formed very different opinions. To the patriotic American colonists, George Washington was a hero and King George a tyrant. And to the British (along with the crown loyalists in America), George Washington was considered a traitor while King George remained a loving father of the people. Truly there are two sides to every story in history. A "lovely book" (School Library Journal, starred review), Rosalyn Schanzer's George vs. George is a 2005 ALA Notable Children's Book and was named a 2005 Best of the Best by the Chicago Public Library.

Rosalyn Schanzer has written and illustrated several outstanding children’s books, including How We Crossed the West, which received starred reviews from School Library Journal and Publishers Weekly. As a child, she always enjoyed reading stories about horses, so by the time she was twelve years old, she’d read all of the Black Stallion books by Walter Farley; she then decided to study the muscle structures of horses so she could draw them herself. She lives with her husband and children in Fairfax Station, Virginia.