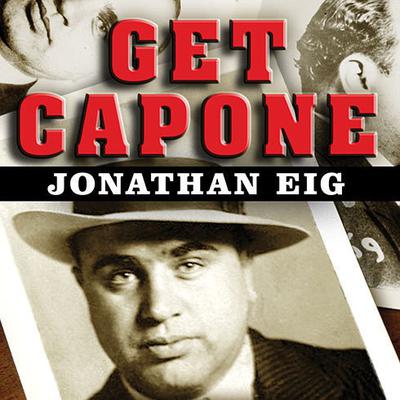 Get Capone: The Secret Plot That Captured America's Most Wanted Gangster

Acclaimed journalist and bestselling author Jonathan Eig blows the lid off the Al Capone story. Based on never-before-seen government documents and newly discovered letters written by Al Capone himself, Get Capone presents America's greatest gangster as you've never seen him before. In addition to IRS files, Eig got hold of the personal papers of the U.S. attorney in Chicago who prosecuted Capone. He even found family members who would share stories about their notorious relative. The author, a former reporter for the Wall Street Journal, brings his uncompromising standards for research and his superb knack for storytelling to one of the most thrilling stories in American history. This eye-opening biography reveals that Capone was the target of one of the most intense criminal investigations in American history—with orders coming directly from the White House. Capone flaunted his criminal success so openly that President Hoover insisted the gangster be stopped. And, despite his many misdeeds, Capone may have been the victim of a rigged trial. Get Capone also offers a bold new theory to explain the Valentine's Day Massacre and sheds new light on Capone's connection—or lack thereof—to the crime.

[Eig] paints a masterly portrait of America's all-time favorite crime boss.... Rich in deaitl and historical context. —The Christian Science Monitor
“Panoramic yet sharply focused, Get Capone is as much a dark history of urban America between the world wars as it is another mobster’s life story.” —New York Times
“Eig’s book excels for its scrupulous reporting and…fresh research that adds depth to the Capone story.” —Chicago Sun Times
“I thought I knew the Capone story, but Eig’s riveting telling of this iconic American story is both fresh and utterly dazzling.” —Ken Burns, award-winning filmmaker and director of The Civil War
“Eig presents a multifaceted portrait of a shrewd man who built a criminal empire worth millions.” —Publishers Weekly (starred review)

Jonathan Eig is the author of several critically acclaimed books, including the New York Times bestseller Luckiest Man. He is a former staff writer for the Wall Street Journal, and he remains a contributing writer there. He has written for the New York Times, New Yorker, Esquire, Washington Post, and other publications. He has appeared in two Ken Burns films for PBS.