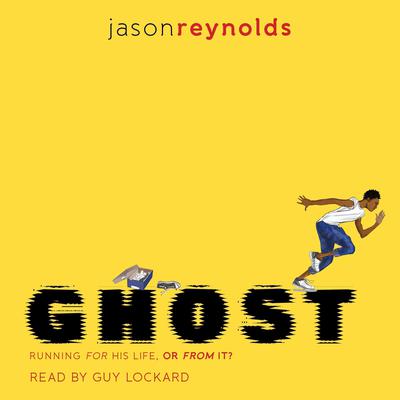 Finalist for the National Book Award for Young People's Literature

A National Book Award Finalist for Young People’s Literature.
Nominated as one of America’s best-loved novels by PBS’s The Great American Read.

Ghost wants to be the fastest sprinter on his elite middle school track team, but his past is slowing him down in this first electrifying novel of a brand-new series from Coretta Scott King/John Steptoe Award–winning author Jason Reynolds.

Ghost. Lu. Patina. Sunny. Four kids from wildly different backgrounds with personalities that are explosive when they clash. But they are also four kids chosen for an elite middle school track team—a team that could qualify them for the Junior Olympics if they can get their acts together. They all have a lot to lose, but they also have a lot to prove, not only to each other, but to themselves.

Running. That’s all Ghost (real name Castle Cranshaw) has ever known. But Ghost has been running for the wrong reasons—it all started with running away from his father, who, when Ghost was a very little boy, chased him and his mother through their apartment, then down the street, with a loaded gun, aiming to kill. Since then, Ghost has been the one causing problems—and running away from them—until he meets Coach, an ex-Olympic Medalist who sees something in Ghost: crazy natural talent. If Ghost can stay on track, literally and figuratively, he could be the best sprinter in the city. Can Ghost harness his raw talent for speed, or will his past finally catch up to him?

“A character whose journey is so genuine that he’s worthy of a place alongside Ramona and Joey Pigza on the bookshelves where our most beloved, imperfect characters live.” —New York Times Book Review
“Reynolds uses a light hand to delve into topics that include gun violence, class disparity, and bullying in this compelling series opener.” —Publishers Weekly (starred review)
“A realistic picture of a boy who needs the support of his community to channel his talent and energy…An essential purchase.” —School Library Journal (starred review)
“Ghost’s narration is candid and colloquial…He is self-focused enough that secondary characters initially feel one-dimensional, Coach in particular, but as he gets to know them better, so do readers, in a way that unfolds naturally and pleasingly.” —Kirkus Reviews (starred review)
“Narrator Guy Lockhard captures the emotions in this story…[and] maintains a good balance between the story’s humor and Ghost’s hidden dark thoughts.” —AudioFile

Jason Reynolds is a #1 New York Times bestselling author, a Newbery Award Honoree, a Printz Award Honoree, a two-time National Book Award finalist, a Kirkus Award winner, a Carnegie Medal winner, a two-time Walter Dean Myers Award winner, an NAACP Image Award Winner, and the recipient of multiple Coretta Scott King honors. He is also the 2020–2021 National Ambassador for Young People’s Literature. His many books include Long Way Down, which received a Newbery Honor, a Printz Honor, and a Coretta Scott King Honor. You can find his ramblings at JasonWritesBooks.com.