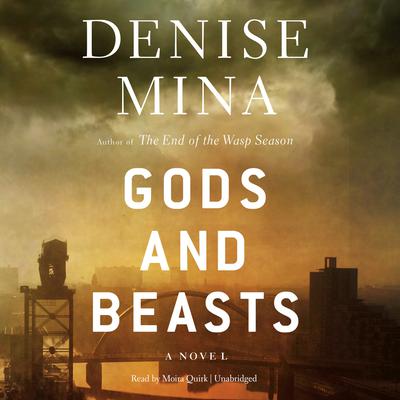 It's the week before Christmas when a lone robber bursts into a busy Glasgow post office carrying an AK-47. An elderly man suddenly hands his young grandson to a stranger and wordlessly helps the gunman fill bags with cash, then he carries them to the door. He opens the door and bows his head; the robber fires off the AK-47, tearing the grandfather in two.

Detective Superintendent Alex Morrow arrives on the scene and finds that the alarm system had been disabled before the robbery. Yet upon investigation, none of the employees can be linked to the gunman. And the grandfather—a life-long campaigner for social justice—is above reproach. As Morrow searches for the killer, she discovers a hidden, sinister political network. Soon it is chillingly clear that no corner of the city is safe, and her involvement will go deeper than she could ever have imagined.

“Mina’s novel skillfully and insightfully focuses on corruption—social, political, criminal, and moral—revealing the constant struggle for power in each of these areas, how it affects and is affected by human nature. Seemingly disconnected, these threads contribute in a cleverly interwoven way to the suspense and complexity of this novel. Narrator Moira Quirk…does an excellent job portraying this collection of unconventional characters, complete with Glasgow and Ayrshire accents. Denise Mina presents a carefully crafted plot, one which listeners will find engaging and enjoyable.” —SoundCommentary.com
“If you don’t love Denise Mina, you don’t love crime fiction. I guarantee Gods and Beasts will be one of your top books of the year.” —Val McDermid, internationally bestselling author
“[The End of the Wasp Season] was an expert psychological deconstruction of the credit crunch, as well as a page-turning police procedural to boot. If anything, Gods and Beasts is even better…Gods and Beasts confirms Mina’s place at the front of the crime-writing pack.” —The Independent (London)
“Denise Mina’s stark depictions of Glasgow have long since reduced the city as shown in the television series Taggart to a tartan theme park. Gods and Beasts is vintage Mina: a complex three-ply plot involving a shooting, blackmail, and corruption, all described with hard-hitting prose and psychological acuity.” —The Telegraph (London)
“Excellent…While Mina keeps Alex’s life outside of work mostly on the back burner, she ups the stakes by taking us into the dark, beating heart of modern Glasgow, where the real deals are struck and the spoils divided.” —Publishers Weekly (starred review)