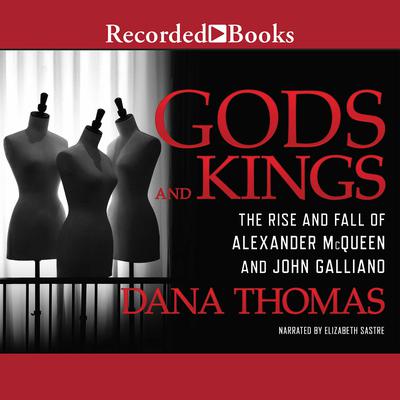 Gods and Kings: The Rise and Fall of Alexander McQueen and John Galliano

In February 2011, John Galliano, the lauded head of Christian Dior, imploded with a drunken, anti-Semitic public tirade. Exactly a year earlier, celebrated designer Alexander McQueen took his own life three weeks before his women's wear show. Both were casualties of the war between art and commerce that has raged within fashion for the last two decades. In the mid-1990s, Galliano and McQueen arrived on the fashion scene when the business was in an artistic and economic rut. They shook the establishment out of its bourgeois, minimalist stupor with daring, sexy designs and theatrical fashion shows. They had similar backgrounds: sensitive, shy gay men raised in tough London neighborhoods, their love of fashion nurtured by their doting mothers. By 1997, each had landed a job as creative director for couture houses owned by French tycoon Bernard Arnault, chairman of LVMH. Galliano's and McQueen's work not only influenced fashion; their distinct styles were reflected across the media landscape. With their help, luxury fashion evolved from a clutch of small, family-owned businesses into a $280 billion-a-year global corporate industry. Executives pushed the designers to meet increasingly rapid deadlines. For both Galliano and McQueen, the pace was unsustainable. The same week that Galliano was fired, Forbes named Arnault the fourth richest man in the world. Two months later, in the wake of McQueen's death, Kate Middleton wore a McQueen wedding gown, instantly making the house the world's most famous fashion brand, and the Metropolitan Museum of Art opened a wildly successful McQueen retrospective, cosponsored by the corporate owners of the McQueen brand. The corporations had won and the artists had lost. In her groundbreaking work, Gods and Kings, acclaimed journalist Dana Thomas tells the true story of McQueen and Galliano. In so doing, she reveals the relentless world of couture-and the price it demanded of the very ones who saved it.

“Fashion columnist Thomas…paints a grim portrait of the fashion industry in this dual biography of John Galliano and Alexander McQueen…offers an alluring look at two edgy, gifted, famous individuals who famously burned out midcareer.” —Publishers Weekly
“A juxtaposition of the storied arcs of two of fashion’s most celebrated, and ultimately doomed, geniuses…This is a dark story about excess, commerce, aristocracy, and fashion as high theater that is as operatic as the dizzying shows it describes. A deep dive into the provocative art of creation and the toll it exacts from those touched by its gifts.” —Kirkus Reviews

Dana Thomas is the author of Fashionopolis: The Price of Fast Fashion and the Future of Clothes, Gods and Kings: The Rise and Fall of Alexander McQueen and John Galliano, and the New York Times bestseller Deluxe: How Luxury Lost Its Luster. She began her career writing for the style section of the Washington Post, and for fifteen years she served as a cultural and fashion correspondent for Newsweek in Paris. She is a regular contributor to the New York Times Style section and has written for the New York Times Magazine, the New Yorker, the Wall Street Journal, the Financial Times, Vogue, Harper’s Bazaar, T: The New York Times Style Magazine, and Architectural Digest. In 1987, she received the Sigma Delta Chi Foundation’s Ellis Haller Award for Outstanding Achievement in Journalism. In 2016, the French Minister of Culture named her a Chevalier of the Order of Arts and Letters.