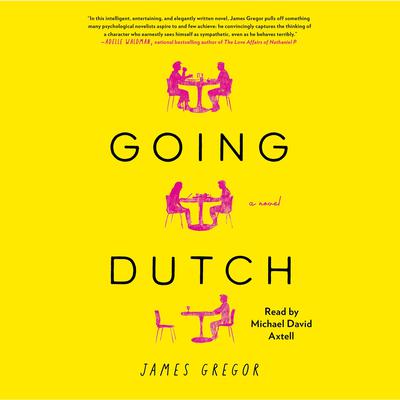 Exhausted by dead-end forays in the gay dating scene, surrounded constantly by friends but deeply lonely in New York City, and drifting into academic abyss, twenty-something graduate student Richard has plenty of sources of anxiety. But at the forefront is his crippling writer’s block, which threatens daily to derail his graduate funding and leave Richard poor, directionless, and desperately single.

Enter Anne: his brilliant classmate who offers to “help” Richard write his papers in exchange for his company, despite Richard’s fairly obvious sexual orientation. Still, he needs her help, and it doesn’t hurt that Anne has folded Richard into her abundant lifestyle. What begins as an initially transactional relationship blooms gradually into something more complex.

But then a one-swipe-stand with an attractive, successful lawyer named Blake becomes serious, and Richard suddenly finds himself unable to detach from Anne, entangled in her web of privilege, brilliance, and, oddly, her unabashed acceptance of Richard’s flaws. As the two relationships reach points of serious commitment, Richard soon finds himself on a romantic and existential collision course—one that brings about surprising revelations.

Going Dutch is an incisive portrait of relationships in an age of digital romantic abundance, but it’s also a heartfelt and humorous exploration of love and sexuality, and a poignant meditation on the things emotionally ravenous people seek from and do to each other. James Gregor announces himself with levity, and a fresh, exciting voice in his debut.

“Every once in a while, a novel of simply unremitting goodness lands on your front porch…One of the best of the best.” —Gary Shteyngart, New York Times bestselling author
“A comedy of manners for the (very) modern age.” —Entertainment Weekly
"Masterful. [An] exciting debut, and will leave you eager for more.” —BuzzFeed
“Narrator Michael David Axtell infuses the protagonist’s inner monologues with wry humor, making his observations even more biting.” —BookPage (starred audio review)
“[An] excellent debut…Marvelously witty…Announces Gregor as a fresh, electric new voice.” —Publishers Weekly (starred review)

James Gregor holds an MFA in Fiction from Columbia. He has been a writer in residence at the Villa Lena Foundation in Tuscany and a bookseller at Shakespeare and Company bookshop in Paris. James was born and grew up in Canada. Going Dutch is his first novel.