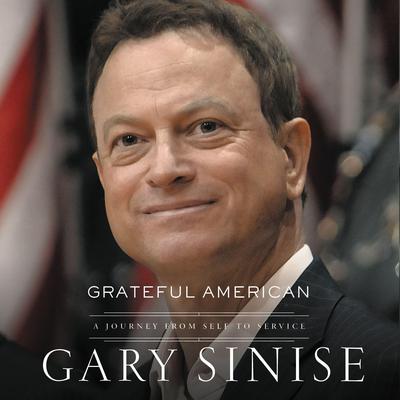 Grateful American: A Journey from Self to Service

As a kid in suburban Chicago, Gary Sinise was more interested in sports and rock-n-roll than reading or schoolwork. But when he impulsively auditioned for a school production of "West Side Story," he found his purpose--or so it seemed. Within a few years Gary and a handful of friends created what became one of the most exciting and important new theater companies in America. From its home in a church basement in Chicago, the Steppenwolf Theatre launched a series of groundbreaking productions, igniting Gary's career along with those of John Malkovich, Joan Allen, Gary Cole, Laurie Metcalf, Dennis Farina, John Mahoney, and others. Television and film came calling soon after, and Gary starred in Of Mice and Men (which he directed) and The Stand before taking the role that would change his life in unforeseeable ways: Lieutenant Dan in the Academy Award-winning Forrest Gump.

The military community’s embrace of the character of the disabled veteran was matched only by the depth of Gary's realization that America's defenders had not received all the honor, respect, and gratitude their sacrifices deserve. In the aftermath of the September 11 attacks, this became Gary's mission. While starring in hits like Apollo 13, Ransom, Truman, George Wallace, CSY: NY, and Criminal Minds: Beyond Borders, Gary has worked tirelessly on behalf of those who serve this country, entertaining more than a half million troops around the world playing bass guitar with his Lieutenant Dan Band, raising funds on behalf of veterans, and eventually founding the Gary Sinise Foundation with a mission to serve and honor America’s defenders, veterans, first responders, their families, and those in need.

Grateful American is the moving, entertaining, profoundly gripping story of how one man found his calling: to see that those who defend this country and its freedoms are never forgotten.

“The book is called Grateful American, and I promise you after you read it you will be grateful for what Gary has accomplished and contributed to our country.” —Clint Eastwood, Academy Award-winning actor and director
“Grateful American isn’t your typical navel-gazing celebrity dispatch. The plain-spoken, Midwest-grounded Sinise has always been about the work and not the fame.” —Washington Post
“As compelling on the page as he is on stage and screen, Sinise shares moving details…This humble and affecting chronicle…is a welcome antidote to a cynical and divided time.” —Booklist (starred review)
“Actor Gary Sinise’s familiar gravelly voice evokes genuine emotion as he tells of his struggle to find his place in the acting world and how he was inspired to give back to the men and women who serve in the U.S. military and to first responders like police and firefighters. Sinise uses his skills as a director and writer to bring order to the scenes described in the story. He allows emphasis, pacing, and dramatic pauses to create emotional tension in the listener. Sinise draws on his experience as a veteran audiobook narrator to deliver his own intriguing story. Listen with a box of tissues and enjoy the twists and turns that brought Sinise to war zones and, eventually, the White House. Winner of the AudioFile Earphones Award.” —AudioFile
“His self-effacing words belie the evident depth of his commitment to helping them, which marks this winningly earnest and unabashedly patriotic story.” —Publishers Weekly

Gary Sinise, born in Blue Island, Illinois, helped launch the Steppenwolf Theater Company at age eighteen. He started his Hollywood career as a director, but his 1994 appearance in Forrest Gump as Lieutenant Dan launched him to fame and earned him an Academy Award nomination. He worked with Tom Hanks again in Apollo 13 and has since appeared in more than thirty other films and television shows.