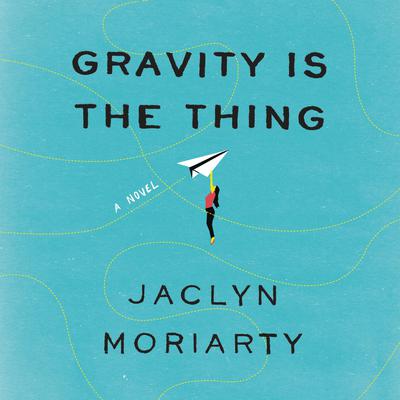 Gravity Is the Thing: A Novel

The adult debut from bestselling, award-winning young adult author Jaclyn Moriarty—a frequently hilarious, brilliantly observed novel in the spirit of Maria Semple, Rainbow Rowell, and Gail Honeyman—that follows a single mother’s heartfelt search for greater truths about the universe, her family and herself.

Twenty years ago, Abigail Sorenson’s brother Robert went missing one day before her sixteenth birthday, never to be seen again. That same year, she began receiving scattered chapters in the mail of a self-help manual, the Guidebook, whose anonymous author promised to make her life soar to heights beyond her wildest dreams.

The Guidebook’s missives have remained a constant in Abi’s life—a befuddling yet oddly comforting voice through her family’s grief over her brother’s disappearance, a move across continents, the devastating dissolution of her marriage, and the new beginning as a single mother and café owner in Sydney.

Now, two decades after receiving those first pages, Abi is invited to an all-expenses paid weekend retreat to learn “the truth” about the Guidebook. It’s an opportunity too intriguing to refuse. If Everything is Connected, then surely the twin mysteries of the Guidebook and a missing brother must be linked?

What follows is completely the opposite of what Abi expected––but it will lead her on a journey of discovery that will change her life––and enchant listeners. Gravity Is the Thing is a smart, unusual, wickedly funny novel about the search for happiness that will break your heart into a million pieces and put it back together, bigger and better than before.

“Tender and frank…A novel of pure velocity; it sucks the reader into Abi’s problems and her joys in equal, brilliant measure. A complex dissection of the self-help industry, as well as a complete and moving portrait of a difficult, delightful woman, Moriarty proves her adult novels can live up to her YA work’s reputation.” —Publishers Weekly (starred review)
“An utterly unique story of one woman’s journey of self-discovery…Moriarty’s characters are delightfully fun and quirky…Though this book may beg comparison to the suspenseful work of her sisters Liane and Nicole, this Moriarty’s graceful discourse on joy is more likely to please readers of Marian Keyes and Maria Semple.” —Booklist
“Quirky and beguiling, this witty quest for the truth will delight anyone mending their own broken life.” —Kirkus Reviews
“One of the most magical, different, interesting, likable, lovable, beautiful, sad, lovely, immensely uplifting books I have ever read…An instant classic.” —Marian Keyes, author of The Break

Jaclyn Moriarty grew up in Sydney, Australia, with four sisters, one brother, two dogs, and twelve chickens. She studied law at the University of Sydney, Yale, and Cambridge and worked as an entertainment lawyer before she wrote the Ashbury High novels. She still lives in Sydney, with her little boy, Charlie.