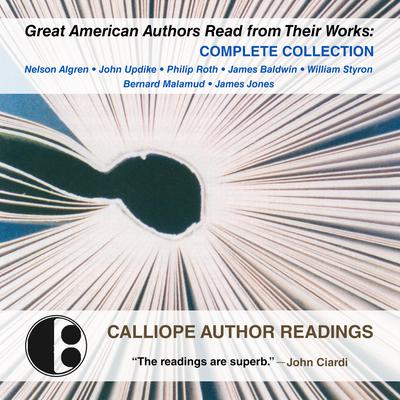 The Great American Authors Read from Their Works Series

These recordings of twentieth-century American authors interpreting their own works were highly praised when first released in the 1960s. Today the cultural and historical value of these recordings makes them an essential part of our literary heritage.

In this collection, James Baldwin reads from Giovanni's Room and Another Country, exploring the challenges of being black and gay in mid-twentieth century America. William Styron reads about a disabled child finding brief moments of joy in Lie Down in Darkness, his novel about a troubled Southern family. James Jones reads the most famous passage from his celebrated World War II novel, From Here to Eternity. And Philip Roth does a hilarious comic turn in a bizarre scene from his early novel, Letting Go.

Additionally, Nelson Algren reads from his most famous novel, The Man with the Golden Arm, about the decline and fall of a drug dealer and card sharp. Bernard Malamud's devastating selection from The Magic Barrel portrays poor, embittered old Jews who achieve a moment of grace after fierce antagonism. In John Updike's story from Pigeon Feathers and Other Stories, a seminary student working as a lifeguard draws a witty and lyrical contrast between saving souls and bodies. And James Jones' account of a World War II battle in Japan in The Thin Red Line shows young soldiers at their most heroic and perilous moments.

“These recordings are powerful and important…Aside from their historical importance they are glorious to listen to.” —Boston Globe
“Superb...They read lovingly and feelingly the sentences and cadences of their stories…One is left with an experience.” —Saturday Review
“The unmistakable stamp of personal passion.” —Chicago Daily News
“What a treasure it is to have this collection of some of modern literature’s best authors reading their most renowned works.” —AudioFile

John Updike (1932–2009) was the author of more than sixty books, including collections of short stories, poems, and criticism. His novels have been honored with two Pulitzer Prize Awards, the National Book Award, and the Howells Medal of the American Academy of Arts and Letters. Hugging the Shore, a collection of essays and reviews, received the National Book Critics Circle Award for criticism.

Philip Roth (1933–2018) was one of the most decorated writers in American history, having won the National Book Critics Circle Award twice, the PEN/Faulkner Award three times, the National Book Award, the Pulitzer Prize in fiction, and many more. He also won the Ambassador Book Award of the English-Speaking Union and in the same year received the National Medal of Arts at the White House. In 2001 he received the highest award of the American Academy of Arts and Letters, the Gold Medal in Fiction, given every six years “for the entire work of the recipient.”

James Baldwin (1924–1987), acclaimed New York Times bestselling author, was educated in New York. His first novel, Go Tell It on the Mountain, received excellent reviews and was immediately recognized as establishing a profound and permanent new voice in American letters. The appearance of The Fire Next Time in 1963, just as the civil rights movement was exploding across the American South, galvanized the nation and continues to reverberate as perhaps the most prophetic and defining statement ever written of the continuing costs of Americans’ refusal to face their own history. It became a national bestseller, and Baldwin was featured on the cover of Time. The next year, he was made a member of the National Institute of Arts and Letters and collaborated with the photographer Richard Avedon on Nothing Personal, a series of portraits of America intended as a eulogy for the slain Medger Evers. His other collaborations include A Rap on Race with Margaret Mead and A Dialogue with the poet–activist Nikki Giovanni. He also adapted Alex Haley’s The Autobiography of Malcolm X into One Day When I Was Lost. He was made a commander of the French Legion of Honor a year before his death, one honor among many he achieved in his life.

Bernard Malamud (1914–1986) was an American author of novels and short stories. Born in Brooklyn and educated at Columbia University, he was one of the great American Jewish authors of the twentieth century. His 1966 novel The Fixer, about anti-Semitism in czarist Russia, won both the National Book Award and the Pulitzer Prize. He also authored many short stories, winning a National Book Award for his collection The Magic Barrel. He was awarded the American Academy of Arts and Letters Gold Medal for Fiction in 183. He taught English at Oregon State University from 1949 to 1961.

William Styron (1925–2006) was the author of several bestselling and award-winning books, including Lie Down in Darkness, which won the 1951 Prix de Rome of the American Academy of Arts and Letters, The Confessions of Nat Turner, which won the 1968 Pulitzer Prize, and Sophie’s Choice, which won the 1980 National Book Award.

James Jones (1921–1977) was an American author known for his explorations of World War II and its aftermath. He won the 1952 National Book Award for his first published novel, From Here to Eternity, which was immediately adapted for the big screen and made into a television series a generation later.