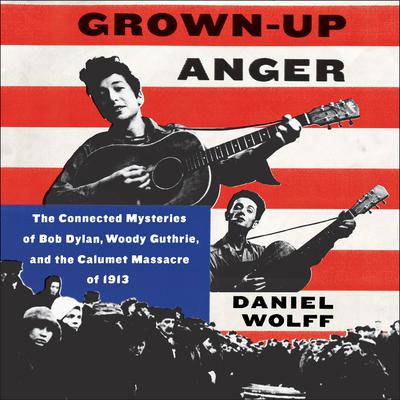 Grown-Up Anger: The Connected Mysteries of Bob Dylan, Woody Guthrie, and the Calumet Massacre of 1913

Paste Magazine Pick of Best Books of 2017 (So Far)

A tour de force of storytelling years in the making: a dual biography of two of the greatest songwriters, Bob Dylan and Woody Guthrie, that is also a murder mystery and a history of labor relations and socialism, big business and greed in twentieth-century America—woven together in one epic saga that holds meaning for all working Americans today.

When thirteen-year-old Daniel Wolff first heard Bob Dylan’s "Like a Rolling Stone," it ignited a life-long interest in understanding the rock poet’s anger. When he later discovered "Song to Woody," Dylan’s tribute to his hero, Woody Guthrie, Wolff believed he’d uncovered one source of Dylan’s rage. Sifting through Guthrie’s recordings, Wolff found "1913 Massacre"—a song which told the story of a union Christmas party during a strike in Calumet, Michigan, in 1913 that ended in horrific tragedy.

Following the trail from Dylan to Guthrie to an event that claimed the lives of seventy-four men, women, and children a century ago, Wolff found himself tracing the history of an anger that has been passed down for decades. From America’s early industrialized days, an epic battle to determine the country’s direction has been waged, pitting bosses against workers and big business against the labor movement. In Guthrie’s eyes, the owners ultimately won; the 1913 Michigan tragedy was just one example of a larger lost history purposely distorted and buried in time.

In this magnificent cultural study, Wolff braids three disparate strands—Calumet, Guthrie, and Dylan—together to create a devastating revisionist history of twentieth-century America. Grown-Up Anger chronicles the struggles between the haves and have-nots, the impact changing labor relations had on industrial America, and the way two musicians used their fury to illuminate economic injustice and inspire change.

“If excellence in audiobook narration means doing everything right while seeming to do little or nothing, Dennis Boutsikaris sets a standard here…Boutsikaris’s reading is expressive but restrained, calculatingly understated in the manner of the music and performers he’s describing. No accents or half-sung lyrics mar a performance that matches the text in every nuance yet never draws attention to itself. Here’s a narrative that engages the heart and mind for a deeply satisfying listening experience. Winner of AudioFile Earphones Award.” —AudioFile
“This elegantly written and insightful cultural history…reads like a historical detective story, one where the sleuth is savvy enough to know some mysteries won’t be solved. A skillful and intrepid researcher, Wolff offers pocket histories of the two singers that echo each other.” —New York Times Book Review
“Wolff has crafted a fascinating and relevant whirlwind examination of music, economic injustice, and two American icons.” —Booklist (starred review)
“A masterful tale of music, social, and economic history…Wolff’s elegantly intertwined historical drama is consistently revelatory. A dazzling, richly researched story impeccably told.” —Kirkus Reviews (starred review)
“In this bold and moving history…Wolff examines how the dust bowl and the Depression transformed the hillbilly entertainer into a radical artist…Without surrendering insight or authority, Wolff spans a remarkable range of material…[ending] in a scathing finale.” —Publishers Weekly
“The path leading from Woody Guthrie to Bob Dylan has been well traveled, but Daniel Wolff has gone off-road and forged bold new connections between the two cultural titans…An imaginative tour de force that sheds new light on Guthrie, Dylan, and the heartbreaking history that created them both.” —Anthony DeCurtis, contributing editor for Rolling Stone
“The secret history that links Bob Dylan and Woody Guthrie…[is] a discovery author Daniel Wolff lays out in fascinating detail in his brilliant Grown-Up Anger.” —Joel Selvin, author of Altamont
“In this book—so soberly inflamed that the pages seem to turn of their own accord—the history of the American twentieth century is made of lodestars that don’t figure in conventional accounts…It is at precisely this moment that its story will be most fully heard.” —Greil Marcus, author of Real Life Rock

Daniel Wolff is the author of several books, including You Send Me: The Life and Times of Sam Cooke, which won the Ralph J. Gleason Music Book Award. He has been nominated for a Grammy and was named Literary Artist of 2013 for Rockland County, New York. A poet, songwriter, and essayist, he has helped produce a number of documentary films with director Jonathan Demme. He lives in Nyack, New York.