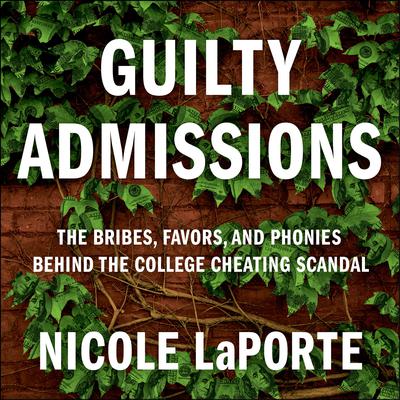 Guilty Admissions: The Bribes, Favors, and Phonies behind the College Cheating Scandal

The shockingly true story of the Varsity Blues scandal, involving crazy parents, privilege, and con men. An entertaining exposé on how the other half gets in.

Guilty Admissions weaves together the story of an unscrupulous college counselor named Rick Singer, and how he preyed on the desperation of some of the country’s wealthiest families living in a world defined by fierce competition, who function under constant pressure to get into the “right” schools, starting with pre-school; non-stop fundraising and donation demands in the form of multi-million-dollar galas and private parties; and a community of deeply insecure parents who will do anything to get their kids into name-brand colleges in order to maintain their own A-list status.

Investigative reporter Nicole LaPorte lays bare the source of this insecurity — that in 2019, no special “hook” in the form of legacy status, athletic talent, or financial giving can guarantee a child’s entrance into an elite school. The result is paranoia, deception, and true crimes at the peak of the American social pyramid.

With a glittering cast of Hollywood actors — including Felicity Huffman and Lori Loughlin — hedge fund CEOs, sales executives, and media titans, Guilty Admissions is a soap-opera-slash-sneak-peek-behind-the-curtains at America’s richest social circles; an examination of the cutthroat world of college admissions; and a parable of American society in 2019, when the country is run by a crass tycoon and all totems of status and achievement have become transactional and removed from traditions of ethical restraint.

"[A] riveting rundown of Operation Varsity Blues…Readers will be captivated by this entertaining look behind the headlines.” —Publishers Weekly
“In this gripping work, journalist LaPorte vividly evokes a high-stakes world…Her research is superb…Readers curious about the dark side of wealth will be enthralled by this exposé of corruption in education.” —Library Journal (starred review)
“A lively, soap-operatic account of the Operation Varsity Blues college admissions scandal.” —Kirkus Reviews

Nicole LaPorte is the author of Guilty Admissions and The Men Who Would Be King: Movies, Moguls, and a Company Called Dreamworks. She is a Los Angeles based senior writer for Fast Company. She previously was a columnist for the New York Times and a staff writer for Newsweek, the Daily Beast, and Variety. She also wrote the “Rules of Hollywood” column for the Los Angeles Times Magazine.