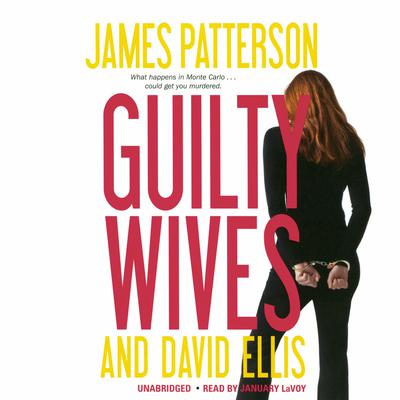 By James Patterson and David Ellis
Read by January LaVoy

Only minutes after Abbie Elliot and her three best friends step off a private helicopter, they enter the most luxurious, sumptuous, sensually pampering hotel they have ever been to. For four days in Monte Carlo they're free to live someone else's life. As the weekend brings pulsating discos, high-stakes casinos, and more, Abbie is transported, finding the greatest pleasure and release she has ever known.

In the morning's harsh light, Abbie awakens on a yacht, surrounded by police. Abbie, Winnie, Serena, and Bryah are arrested and accused of the foulest crime imaginable. And now the vacation of a lifetime becomes the fight of a lifetime—for survival. Guilty Wives is the ultimate indulgence, the kind of nonstop joyride of excess, friendship, betrayal, and danger that only James Patterson can create.

“LaVoy’s narration perfectly matches the authors’…entertaining prose. She lends the characters unique voices and manages to keep them grounded in reality—something a lesser narrator might not have been able to pull off. And most important, LaVoy never forgets this is a thriller, infusing each chapter with just enough tension to keep listeners glued to their seats.” —Publishers Weekly (audio review)