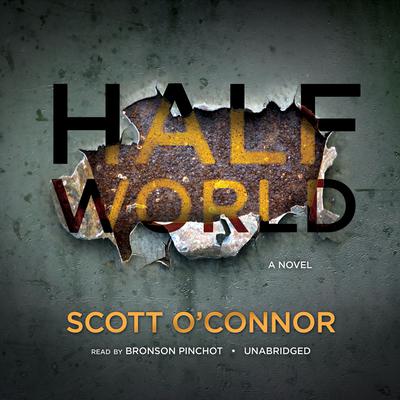 Half World: A Novel

Inspired by real CIA operations, this is the riveting novel of a fraying CIA analyst who conducts secret mind-control experiments and the young agent who, years later, uncovers the appalling legacy of the program and the people destroyed by it.

From its official sanction in 1953 to its shutdown in 1973, the CIA clandestinely conducted methods of mind control on unwitting American and Canadian citizens. This covert and illegal operation, Project MKULTRA, eventually made national headlines upon the declassification of thousands of documents in 2001.

Intrigued by the people empowered to enact such abuses and the legacy of such an operation, Scott O'Connor weaves the nuanced and compelling story of Henry March, a CIA agent forced to spearhead a series of insidious mind-control experiments in San Francisco. With each passing day, Henry's existence becomes a nightmare, his identity withering as he works over the hapless men lured into his facility. Struggling between his duty to his country and his responsibility to his wife and children, Henry finally reaches a breaking point, leaving both his project and mind fractured. Amid the wreckage, he disappears, becoming the deepest Ultra mystery.

Two decades later, Dickie Ashby, a young CIA agent, is sent to Los Angeles to infiltrate a group of bank-robbing radicals who claim to have been abused in a government brainwashing operation years earlier. The members of the group know they need to find Henry March and that the only bridge to Henry is his daughter, Hannah, who lives in the city. Dickie suddenly finds himself dragged into the stunning legacy of the experiments, torn between doing his job, helping the victims of Henry's program, and protecting Hannah.

Called "one to watch" (Los Angeles Times) and hailed for his ability "to make something beautiful of unspeakable matters" (New York Times), O'Connor will stir your emotions with Half World, a mesmerizing novel about reality and the basic incorruptible value of human relationships.

“O’Connor’s spare prose amplifies the horror of his story. It also compels the reader to inhabit his characters’ lives. Half World is a stunningly grim and emotionally harrowing read and an astute and evocative portrayal of government paranoia during the Cold War and Vietnam War eras.” —Booklist (starred review)
“O’Connor writes with grace and force.” —Publishers Weekly
“O’Connor creates a fictional account of the infamous CIA program that subjected unwitting Americans to mind-control experiments using drugs and other methods of brainwashing…O’Connor is a gifted stylist, and he vividly captures the rabbit hole that swallows agents, their families, and their victims alike…Fascinating,” —Library Journal
“The hunters are the haunted in a thriller from Los Angeles–based author O’Connor that mines the depths of fact and fiction…An invigorating historical thriller that examines the boundaries of man.” —Kirkus Reviews
“Scott O’Connor’s Half World is like being granted clearance to classified files about a bizarre and fascinating moment in our nation’s history—this is literary suspense of the highest order, and with every page I was intrigued a bit more, horrified a bit more, until I felt I, too, had been brainwashed and found it impossible to stop reading this beautifully written and utterly compelling novel. Now I must read it again. Now I must.” —Alan Heathcock, award-winning author of Volt
“O’Connor shows the beauty, the complex blend of dirty truth and high ideals that reveal the human in all of us with an intimacy, elegiac gravitas, and deep respect. A strong voice.” —Chris Abani, author of The Virgin of Flames

Scott O’Connor is the author of the novella Among Wolves, and the novels Untouchable and Half World. He has been awarded the Barnes & Noble Discover Great New Writers Award, and his stories have been short-listed for the Sunday Times/EFG Story Prize and cited as Distinguished in Best American Short Stories. Additional work has appeared in the New York Times Magazine, Zyzzyva, The Rattling Wall, and the Los Angeles Review of Books.