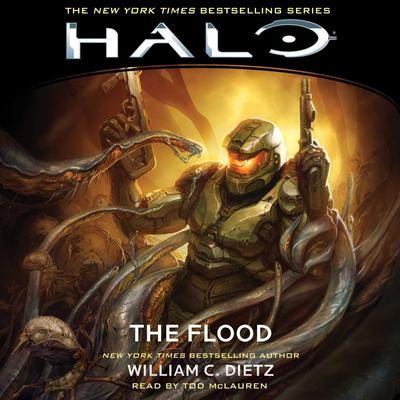 The bestselling adaptation of the iconic video game Halo: Combat Evolved featuring the Master Chief—part of the expanded universe based on the award-winning video game series!

2552. Having barely escaped the final battle for Reach against the vast alien alliance known as the Covenant, the crew of the Pillar of Autumn, including Spartan John-117—the Master Chief—and his AI companion Cortana, is forced to make a desperate escape into slipspace. But their destination brings them to an ancient mystery and an even greater struggle. In this far-flung corner of the universe floats a magnificently massive, artificial ringworld. The crew’s only hope of survival is to crash-land on its surface and take the battle opposing the Covenant to the ground.

But they soon discover that this enigmatic ringworld is much more than it seems. Built one hundred thousand years ago by a long-lost civilization known as the Forerunners, this “Halo” is worshipped by the Covenant—a sacred artifact they hope will complete their religious quest for supposed transcendence, and they will stop at nothing to control it. Engaging in fierce combat, Master Chief and Cortana will go deep into the Halo construct and uncover its dark secret and true purpose—even as a monstrous and far more vicious enemy than the Covenant emerges to threaten all sentient life on Halo and the galaxy beyond…

“When it comes to military science fiction, William Dietz can run with the best.” —Steve Perry, author of The Tejano Conflict, praise for the author

William C. Dietz is the New York Times bestselling author of more than fifty novels, including Halo: The Flood and the Legion of the Damned series. He grew up in the Seattle area, served as a medic with the navy and marines, and graduated from the University of Washington. He worked as a surgical technician, a news writer, a college instructor, a television producer, and a director of public relations for an international telephone company prior to embarking on a full-time writing career.