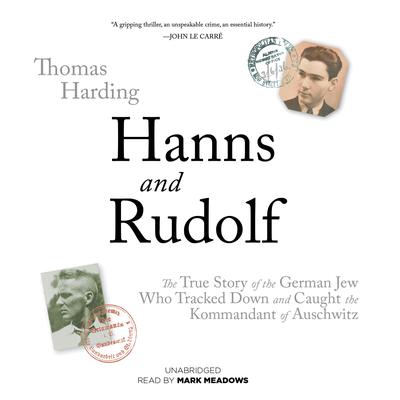 Hanns and Rudolf: The True Story of the German Jew Who Tracked Down and Caught the Kommandant of Auschwitz

May 1945. In the aftermath of the Second World War, the first British War Crimes Investigation Team is assembled to hunt down the senior Nazi officials responsible for the greatest atrocities the world has ever seen. One of the lead investigators is Lieutenant Hanns Alexander, a German Jew who is now serving in the British Army. Rudolf Höss is his most elusive target. As kommandant of Auschwitz, Höss not only oversaw the murder of more than one million men, women, and children, he was the man who perfected Hitler's program of mass extermination. Höss is on the run across a continent in ruins, the one man whose testimony can ensure justice at Nuremberg.

Hanns and Rudolf reveals for the very first time the full, exhilarating account of Höss' capture, an encounter with repercussions that echo to this day. Moving from the Middle Eastern campaigns of the First World War to bohemian Berlin in the 1920s to the horror of the concentration camps and the trials in Belsen and Nuremberg, it tells the story of two German men—one Jewish, one Catholic—whose lives diverged and intersected in an astonishing way.

Thomas Harding is a former documentary filmmaker and journalist who has written for the Financial Times and the Guardian, among other publications. He cofounded a television station in Oxford, England, and for many years was an award-winning publisher of a newspaper in West Virginia. He lives in Hampshire, England.