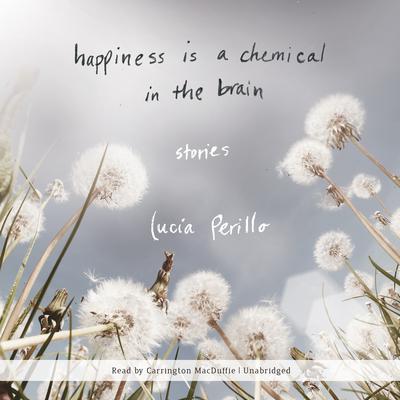 Happiness Is a Chemical in the Brain: Stories

One of the 2012 Kirkus Reviews’ Best Books for Fiction

A Kirkus Reviews “New and Notable Title”, May 2012

A stunning debut from an award-winning poet

Populating a small town in the Pacific Northwest, the characters in Lucia Perillo's story collection all resist giving the world what it expects of them—and are surprised when the world comes roaring back.

An addict trapped in a country house becomes obsessed with vacuum cleaners and the people who sell them door-to-door. An abandoned woman seeks consolation in tales of armed robbery told by one of her fellow suburban housewives. An accidental mother struggles to answer her daughter's badgering about her paternity. And in three stories readers meet Louisa, a woman with Down syndrome who serves as an accomplice to her younger sister's sexual exploits and her aging mother's fantasies of revenge.

Together, Happiness Is a Chemical in the Brain is a sharp-edged, witty testament to the ambivalence of emotions, the way they pull in directions that often cancel one another out or twist their subjects into knots. In lyrical prose, Perillo draws on her training as a naturalist and a poet to map the terrain of the comic and the tragic, asking how we mark the boundaries between these two zones. What's funny, what's heartbreaking, and who gets to decide?

“Lucia Perillo isn’t just a strikingly original poet; she’s a top-notch fiction writer as well. The stories in this bleakly funny and harrowing collection are reminiscent of both Raymond Carver and Denis Johnson, but the vision than animates them is Perillo’s own, unique and unmistakable.” —Tom Perrotta, New York Times bestselling author
“With bleak whimsy and sweet sadness, Perillo’s poetry—a body of work spanning more than twenty years—celebrates a world that often hurts her. This first story collection echoes versions of her history, as a variety of flawed but enduring characters in a small town in the Pacific Northwest struggle against the confines of their lives.”        —New York Times Book Review
“A lyrical short story collection that reveals a genius for plot and metaphor…Perillo shows a supple imagination and wit as she explores fate and its ironies…Perillo strikes a glorious balance between wryly intelligent prose and emotional force, recalling Alice Munro at her best. This volume’s vibrant stories demonstrate the full potential of the short-story form when put in the hands of a true artist.” —Publishers Weekly (starred review)
“These tales are as beautifully patterned as poetry, as saturated in feeling, open to ambiguity, and laced with electrifying images. Here, too, are Perillo’s distinctively knowing humor and naturalist’s eye, making for startling stories that, like a drop of pond water under a microscope, teem with unexpected and intricate life.” —Booklist (starred review)
“Emotionally unflinching stories of considerable power, wonder, and humor.” —Kirkus Reviews (starred review)
“Perillo has an eye for the rich juxtapositions and ironies that can enliven a story…A memorable collection.”  —Library Journal
“Perillo’s characters are tough but with an edgy wit and a refreshing lack of self-pity, despite their often dead-end circumstances.”  —BookPage

Lucia Perillo has published five books of poetry and a collection of essays. Her book Inseminating the Elephant won the Bobbitt Prize and was a finalist for the 2010 Pulitzer Prize in Poetry. Happiness Is a Chemical in the Brain is her first work of fiction. She lives in Olympia, Washington.