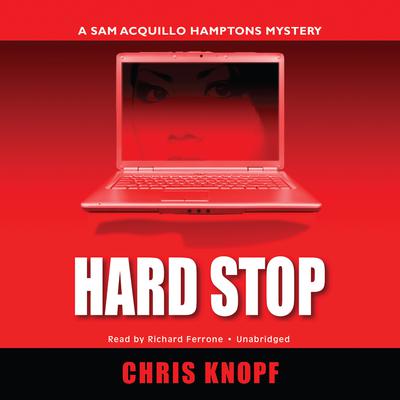 Sam Acquillo is getting to be a lot more sociable. People are constantly dropping by, including guys in black outfits with .45 automatics breaking into his cottage in the middle of the night.

Though on doctor’s orders to stay clear of violence and mayhem, Sam does what’s needed to encourage a candid conversation with the home invader, with surprising results. It seems a person important to the private life of a very important person has gone missing in the Hamptons. And it looks like the best way to get her back is to extort the cooperation of Sam Acquillo.

Suddenly, Sam’s past reaches out to pull him back into the world of big money and even bigger egos, where the term “corporate intrigue” is redundant and ambition the only virtue. But this time, there’s some added incentive: an opportunity to get a piece of his old life back, the only piece Sam might actually want.

“Rewarding…Knopf blends familiar elements in unusually pleasing fashion and adds plenty of original touches as well…Acquillo is a savvy operator who loves problem solving and has the tenacity of a pit bull. His penchant for intriguing predicaments bodes well for a long and successful series.” —Publishers Weekly
“Fans of Knopf’s Sam Aquillo series will not be disappointed by this compelling thriller in which their hero is drawn back into the secretive world of Con Globe…Narrator Richard Ferrone reins in his powerful voice to deliver a modestly restrained reading that captures Aquillo’s yearning for the simple life he has left behind. Ferrone masters his emotions, knowing when to break out in a blind rage and when to quietly allow Aquillo’s inner demons to haunt his soul.” —AudioFile
“Another clever caper in an underappreciated series starring a hard-boiled curmudgeon.” —Booklist
“Good writing, some humor, a complex mystery. If you have not met Sam Aquillo yet, this would be a good book to begin with. Or go back and read the others first and catch up. You will have a good time.” —Pop Culture Magazine

Chris Knopf’s mystery novels have received exceptional awards and accolades, with critics likening his character Sam Aquillo to Dashiell Hammett’s Sam Spade, Raymond Chandler’s Philip Marlowe, and Robert B. Parker’s Spenser, while repeatedly comparing Knopf’s work to that of Elmore Leonard, John D. MacDonald, and Ross Macdonald. Two Time was one of thirteen mysteries listed as recommended summer reading in the New York Times Book Review, and Publishers Weekly chose it as one of the “Best 100 Books for 2006.” Head Wounds won the 2008 Benjamin Franklin Award for Best Mystery. Dead Anyway was listed on the 2012 Best Fiction lists of both Publishers Weekly and Kirkus Reviews. Knopf is a sailor, cabinetmaker, and advertising executive in Connecticut. He and his wife Mary also spend considerable time at their Long Island home in Southampton.