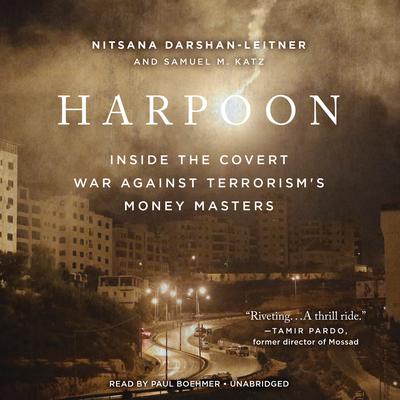 Harpoon: Inside the Covert War Against Terrorism's Money Masters

A revelatory account of the cloak-and-dagger Israeli campaign to target the finances fueling terror organizations--an effort that became the blueprint for U.S. efforts to combat threats like ISIS and drug cartels.

ISIS boasted $2.4 billion of revenue in 2015, yet for too long the global war on terror overlooked financial warfare as an offensive strategy. "Harpoon," the creation of Mossad legend Meir Dagan, directed spies, soldiers, and attorneys to disrupt and destroy money pipelines and financial institutions that paid for the bloodshed perpetrated by Hamas, Hezbollah, and other groups. Written by an attorney who worked with Harpoon and a bestselling journalist, Harpoon offers a gripping story of the Israeli-led effort, now joined by the Americans, to choke off the terrorists' oxygen supply, money, via unconventional warfare.

Nitsana Darshan-Leitner is an Israeli activist and attorney. As the founder and director of the Israel Law Center, Shurat Ha’Din, based outside Tel Aviv, she has represented hundreds of terror victims in lawsuits.

Samuel M. Katz is the co-author of the New York Times bestseller Under Fire: The Untold Story of the Attack in Benghazi and author of The Ghost Warriors.

Samuel M. Katz is an internationally recognized author and expert on Middle East security issues, international terrorism, counter-terrorism, and special operations. His books include Relentless Pursuit: The DSS and the Manhunt for the Al-Qaeda Terrorists and The Hunt for the Engineer: How Israeli Agents Tracked the Hamas Master Bomber.