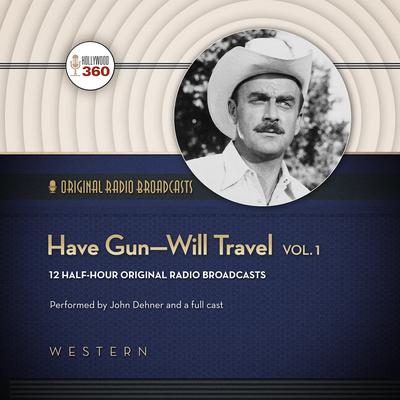 Have Gun—Will Travel follows the adventures of Paladin, a soldier of fortune turned hired gunfighter, played by John Dehner. Paladin prefers to settle problems without violence, yet when forced to fight, he excels.

It's 1875, and Paladin lives at the swanky Carlton Hotel in San Francisco, where he dresses in formal wear, eats gourmet food, attends the opera, has a Chinese valet named Hey Boy, and enjoys the company of beautiful women. When working as a gun-for-hire, he dresses in all black, uses calling cards, and wears a holster decorated with a chess knight emblem. This symbol refers to his name and his occupation as a champion-for-hire. One of radio's best-loved Westerns, Have Gun—Will Travel aired on the radio from 1958 until 1960 and was a successful offshoot of the highly rated television show.

Episodes include "Strange Vendetta," "The Road to Wickenberg," "Ella West," "The Outlaw," "The Hanging Cross," "No Visitors," "Helen of Abajinian," "The Englishman," "Three Bells to Perdido," "The Teacher," "A Matter of Ethics," and "Killer's Widow."

Three of the episodes were written by Gene Roddenberry. Hey Boy is played by Ben Wright.

“A gourmet and connoisseur of fine wine, fine women, and Ming Dynasty artifacts, Paladin would quote Keats, Shelley, and Shakespeare with the same self-assurance that he brought to the subjugation of frontier evildoers.” —Peter Orlick of the Museum of Broadcast Communications