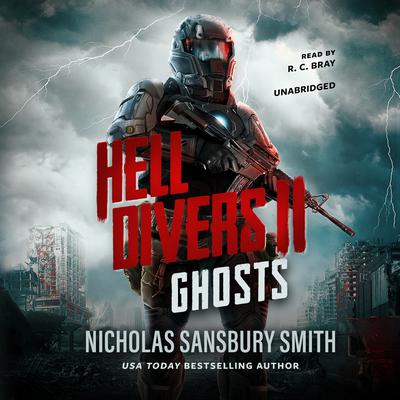 Betrayal and sacrifice in the skies …

Ten years ago, Hell Diver Xavier “X” Rodriguez fell to Earth. Those he left behind went on without him aboard the airship he once called home. Michael Everhart—the boy once known as Tin—has grown into a man and the commander of Hell Diver Raptor Team. While Michael dives to help keep the Hive in the air, Captain Leon Jordan rules with an iron fist at the helm of the ship. But unrest stirs under his strict leadership as a prophecy of hope sweeps the lower decks.

When a mysterious distress signal calls the Hell Divers to the surface, Michael and his loyal team begin to uncover long-buried truths and the secrets Captain Jordan will do anything to keep. They dive so humanity survives … but will they survive the ultimate betrayal?

“There’s a lot of danger and shooting and killing and dying. But there are also a lot of human relationships and political maneuvering and mysteries and discoveries. I was surprised how much I cared. And I was pleased that Smith really knows how to deliver a powerful story…R. C. Bray’s narration…is the kind of low-key performance that suits intense action perfectly…Bray hits exactly the right tone for a gripping adventure story.” —Orson Scott Card, New York Times bestselling author
“A well-told, action-packed tale…This story has something for even those who don’t favor military science fiction and Mr. Smith is to be applauded for a strong comeback in this second book in the Hell Divers series.” —SFRevu
“Riveting, action-packed, and brought to life with R. C. Bray’s masculine performance, Hell Divers II: Ghosts is highly recommended, especially for connoisseurs of the genre.” —Midwest Book Review (audio review)

A Great Story Full of Emotion

Hell Divers 2: Ghosts is set 10 years after the original Hell Divers. X was left for and presumed dead on the surface of the Earth. Since then a whole new group of Hell Divers has risen up from the ashes. A new captain is in charge of the ship and they don’t dive into Red Zones anymore. But all of that is about to change.

This story jumps right back into the footsteps of the last book. Smith has a way of writing that sucks you in and keeps you on the edge of seat throughout. Fans of the first book will definitely enjoy this one. The cast of characters is a little different with a few familiar faces. I particularly enjoyed reading out X’s adopted son “Tin” and his new adventures as a Hell Diver and an adult.

Smith wrote a lot about struggles in this book. The struggle to stay alive (on numerous accounts), the struggle to keep the ship up, the struggle against mutiny, and the struggle for self-preservation. I like that this book had an overarching feeling of a struggle because humans struggle, especially ones that weren’t meant to be airborne for 200 years on end.

The great R.C. Bray narrated Hell Divers 2: Ghosts, and did a heck of a job. His voice has the perfect range of the types of characters that Smith writes about and at times he really becomes these people.

Overall, Ghosts was a great read that I finished in a couple sittings. I couldn’t put it down and now I’m anxiously awaiting the third book to be released (and recorded by Bray, I hope!)