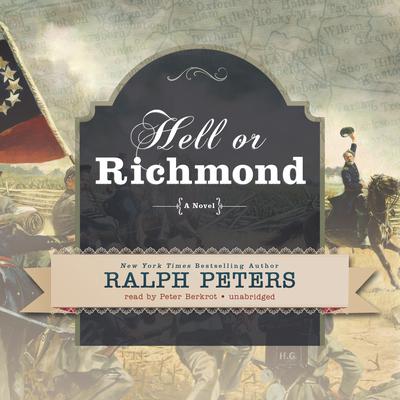 Hell or Richmond: A Novel

Winner of the W. Y. Boyd Literary Award for Excellence in Military Fiction

Between May 5 and June 3, 1864, the Union and Confederate armies suffered eighty-eight thousand casualties. Twenty-nine thousand were killed, wounded, or captured in the first two days of combat. The savagery shocked a young, divided nation. Against this backdrop of the birth of modern warfare and the painful rebirth of the United States, Peters has created a breathtaking narrative.

In Hell or Richmond, thirty days of ceaseless carnage are seen through the eyes of a compelling cast, from the Union's Harvard valedictorian "boy general," Francis Channing Barlow, to the brawling "dirty boots" Rebel colonel, William C. Oates. From Ulysses S. Grant and Robert E. Lee to a simple laborer destined to win the Medal of Honor, Peters brings to life an enthralling array of leaders and simple soldiers from both North and South, fleshing out history with stunning, knowledgeable realism.

From the horrific collision of armies in the Wilderness, where neither side wanted to fight, to the shocking slaughter of the grand charge at Cold Harbor, this epic novel delivers a compelling, authentic, and suspenseful portrait of Civil War combat.

Commemorating the approaching 150th anniversary of this grim encounter between valiant Americans, Ralph Peters brings to bear the lessons of his own military career, his lifelong study of this war and the men who fought it, and his skills as a bestselling, prizewinning novelist to portray horrific battles and sublime heroism as no other author has done.

“[A] landmark of historical fiction...the finest Civil War novelist writing today.” —New York Journal of Books
“Superbly researched and brought to life…The real strength of the book is the way the characters, all of them historical, are given life, even if some of them have to be reconstructed…One of the great Civil War novels of our time.” —Booklist (starred review)
“Peters crafts a lurid spectacle of close, personal warfare; soldiers are drenched in scorching heat and humidity, soiled by rain and mud, choked by drifting smoke, exhausted from marching, and ill with dehydration and dysentery…Raw, violent, and frighteningly realistic…An insightful, epic novel.”  —Publishers Weekly
“Swift-moving…harrowing…[Peters] writes with a fine balance of historical accuracy and drama, turning in telling portraits not just of the generals but also of the privates from German farms and backwoods Appalachian huts who met and died on those Virginia battlefields…A solid work of historical fiction.” —Kirkus Reviews
“Firmly grounded in the historical record, Hell or Richmond recounts the horrific bloodbaths of the Wilderness, Spotsylvania, and Cold Harbor with the skill of an accomplished novelist…Gripping you-are-there urgency…enthralling historical fiction of the highest order.” —Gordon C. Rhea, author of The Battle of the Wilderness and Cold Harbor
“A profound reflection on the relationship of men and violence. Ralph Peters continues to be the most reliable, insightful, and readable historian of our times…and he never loses sight of the human beings, great and small, caught up in war’s vortex. An outstanding read.” —General Sid Shachnow, US Army Special Forces (Ret.)