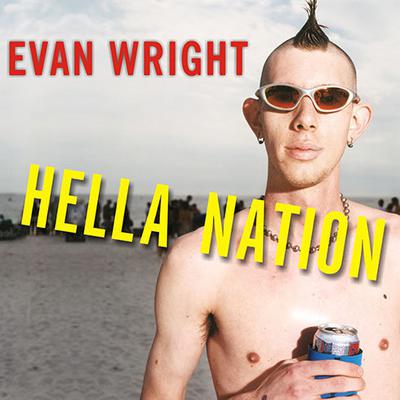 Hella Nation: Looking for Happy Meals in Kandahar, Rocking the Side Pipe, Wingnut's War Against the GAP, and Other Adventures with the Totally Lost Tribes of America

From his work as a reporter at Hustler magazine to his National Magazine Award–winning writing for Rolling Stone and Vanity Fair, Evan Wright has always had an affinity for outsiders—what he calls "the lost tribes of America." The previously published pieces in this collection chart a deeply personal journey, beginning with his stark but sympathetic portrayals of sex workers in Porn Valley, through his raw portrait of a Hollywood überagent–turned–war documentarian and hero of America's far right. Along the way, Wright encounters runaway teens earning corporate dollars as skateboard pitchmen; radical anarchists plotting the overthrow of corporate America; and young American troops on the hunt for terrorists in the combat zones of the Middle East. His subjects are people for whom the American dream is either just out of grasp or something they've chosen to reject altogether. Sometimes frightening, usually profane, and often darkly comic, Hella Nation is Evan Wright's meticulously observed tour of the jagged edges of all those other Americas hiding in plain sight amid the nation's malls and gated communities. This collection also includes an all-new, autobiographical introductory essay by the author.

“[This] is some top-drawer writing…the total effect reflects a literary rebel who wants to break convention.” —Publishers Weekly
Vivid confirmation of the arrival of a major chronicler of those who live on or beyond the margins of the American mainstream. —Kirkus
“Hugely entertaining book…funny, mesmerizing, frightening, and mind-boggling (sometimes all in the same essay)…Wright is an engaging storyteller who writes nonfiction with the eye and voice of a novelist…Gonzo journalism lives.” —Booklist

Evan Wright, author of Generation Kill and Hella Nation, is a contributing editor to Vanity Fair. He has also written for Rolling Stone, the New York Times, and the Los Angeles Times, among other publications. Wright has won two National Magazine Awards for reporting and profile writing, the Los Angeles Times Book Award, the J. Anthony Lukas Book Prize, a PEN Literary Award, and a General Wallace M. Greene Jr. Award from the Marine Corps Heritage Foundation. He lives in southern California.