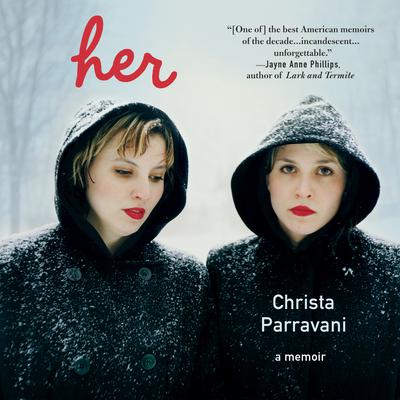 Raised up from poverty by a determined single mother, gifted and beautiful twin sisters Christa and Cara Parravani were able to create a private haven of splendor and amusement that they shared between themselves. They earned their way into a prestigious college, established careers as artists (a photographer and a writer, respectively), and entered young marriages. But plagued by their father’s early rejection of them and further damaged by being raped as a young woman, Cara veered into depression, drugs, and a shocking early death. Some time after Cara was gone, Christa read that when an identical twin dies, regardless of the cause, fifty percent of the time the surviving twin dies within two years. By then, that shocking statistic rang all too true. “Flip a coin,” she had come to think. “Those are my chances of survival.” While at first Christa had fought to stop Cara’s downward spiral, after her sister’s death she suddenly found herself struggling to survive her own.

Christa Parravani is a writer and photographer. Her photographs have been exhibited internationally, and are represented by the Michael Foley Gallery in New York City and the Kopeikin Gallery in Los Angeles. She has taught photography at Dartmouth College, Columbia University, and UMass, Amherst. She earned her MFA in Visual Art from Columbia University and her MFA in Creative Writing from Rutgers, Newark. She lives in Brooklyn with her husband, the writer Anthony Swofford, and their daughter.