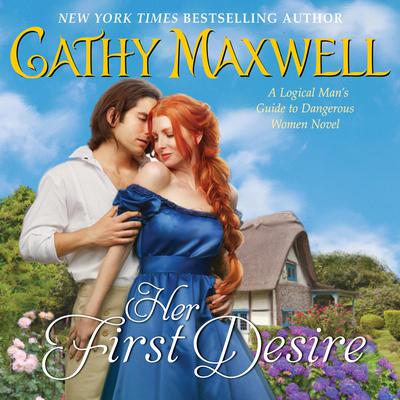 If you love Lenora Bell and Tessa Dare, you’ll love the next book in New York Times bestselling author Cathy Maxwell’s Logical Man’s Society series about a delicious battle of the sexes between a determined woman and a stubborn gentleman.

She arrived in town, beautiful and bold and declaring that she’s inherited property that he has already claimed! As a member of the local Logical Men’s Society, Ned Thurlowe prides himself on thinking clearly and calmly at all times. And it’s clear that the meeting place of the society—a local tavern—is his even if the men have turned it to shambles.

But Ned’s claim is challenged Gemma Estep, who’s announced she’s decided to turn it into some sort of respectable tea garden for the local ladies. Ned challenges Gemma, and in doing so behaves most illogically, for though he wants to dismiss her, he also can’t help but desire her.

Gemma has had enough of men telling her what to do, and she’s vowed to make her own way in the world. And Ned Thurlowe is ruining her plans. Not only has he laid claim to her property, pitting them in a heated fight for its ownership, he’s also arousing in her feelings she’s never sensed before.

And although they argue, they quickly discover they have more in common than they’d each ever dreamed—could their disagreement be turning into desire?

“Maxwell builds a lovely world, imbuing the varied inhabitants of Maidenshop with distinctive personalities while insightfully illustrating the capacity of women’s communities to heal and empower. A sweet romance enlivened by a richly detailed and warm setting.” —Kirkus Reviews

Cathy Maxwell is a New York Times bestselling author whose résumé includes years as a naval officer, news broadcaster, and costume designer for theater productions. These days, she spends hours in front of her computer pondering the question, Why do people fall in love? It remains for her the great mystery of life and the secret to happiness.