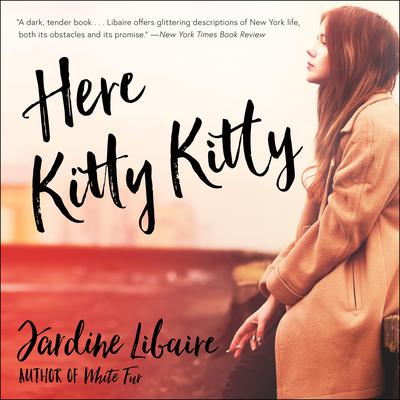 Lee is at a tender and dangerous breaking point: she's not a kid anymore but still acting like one. She wants to be an artist, but her rent-paying SoHo restaurant job has taken over, and the late nights at strip clubs and afterhours joints have gone from joyful and crazy to just plain crazy. She's not alone among the chaotic souls of late-90s Williamsburg, Brooklyn—we root for her to grow up but she avoids reality, burying her fears in vintage Dior dresses, bad cocaine, cheeseburgers, and whiskey.

Things slide downhill when she accepts money from her older boyfriend Yves, something she swore she'd never do, until she was being evicted. Meanwhile, Kelly—a new bartender with homemade tattoos and a murky past—shows up on the scene.

Lee can be both narcissistic and earnest as she leads us through dark, glittering underworlds of New York City. Libaire's voice, like her heroine, is tough, elegant, and full of dreams. Here Kitty Kitty is an unforgettably vivid portrait of a woman finding her way at the turn of the twenty-first century.