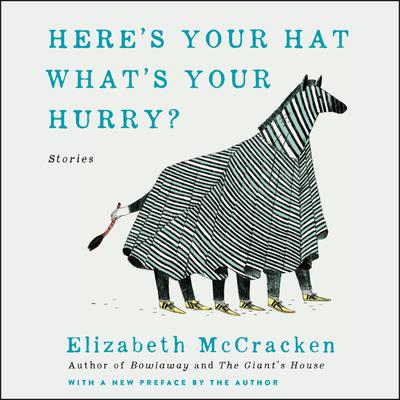 By Elizabeth McCracken
Read by Kate Reading  and Johnny Heller

The singular, enchanting debut story collection from Elizabeth McCracken, now back in print as part of Ecco’s “Art of the Story” series, and with a new introduction from the author. Called “astonishingly assured” by The Guardian, the nine stories that make up Elizabeth McCracken’s debut story collection deal with oddball characters doing their very best to forge connections with those around them.

In “It’s Bad Luck to Die” a woman marries an older tattoo artist and finds comfort in agreeing to act as a canvas for his most elaborate work. “Some Have Entertained Angels, Unaware” follows a young girl as she comes face to face with a cast of eccentrics her recently-widowed father has invited to live in their expansive but dilapidated home. And in the title story, a young man and his wife are perplexed when an outspoken old woman shows up on their doorstep for a visit, claiming to be a distant aunt, even though she can’t be traced on a family tree.

At once captivating and offbeat, Here’s Your Hat What’s Your Hurry is a dazzling showcase of the early years of Elizabeth McCracken’s prodigious talent.

“Astonishingly assured.” —Guardian (London)
“All the stories in this offbeat collection live up to the promise of their titles…Although McCracken has filled her stories with a cast of oddballs, she has created such compelling lives for them that she moves beyond our curiosity to gain our sympathy…Wonderful.” —Library Journal
“McCracken revels in the bizarre, but she’s a true romantic, wonderfully attuned to the ordinary in the extraordinary and the miraculous in the everyday.” —Booklist

Elizabeth McCracken is the author of The Giant’s House, which was nominated for the National Book Award; Niagara Falls All Over Again, winner of the PEN/Winship Award; and Here's Your Hat What’s Your Hurry, a collection of stories. She earned her BA and MA from Boston University, an MFA from the University of Iowa, and an MS in library science from Drexel University. McCracken has received grants and awards from the Fine Arts Work Center in Provincetown, the National Endowment for the Arts, the American Academy of Arts and Letters, the Guggenheim Foundation, and the American Academy in Berlin. She is married to the playwright, novelist, and artist, Edward Carey.