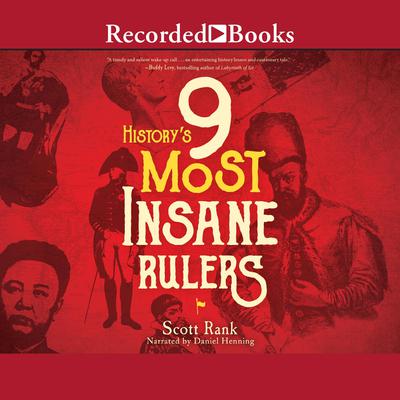 Few mixtures are as toxic as absolute power and insanity. When nothing stands between a leader’s delusional whims and seeing them carried out, all sorts of bizarre outcomes are possible.

History’s 9 Most Insane Rulers looks at the lives of the nine most mentally unbalanced figures in history. Some suffered from genetic disorders that led to schizophrenia, such as French King Charles VI, who thought he was made of glass. Others believed themselves to be God’s representatives on earth and wrote religious writings that they guaranteed to the reader would get them into heaven, even if these leaders were barely literate.

Whether it is Ottoman Sultan Ibrahim I practicing archery on palace servants or Turkmenistan president-for-life Akhbar Turkmenbashi renaming the days of the week after himself and constructing an eighty-foot-tall golden statue that revolves to face the sun, crazed leaders have plagued society for millenia.

While such stories are amusing, this book also contemplates the addictive nature of power and the effects it has on those who cling to it for too long. It explores how leaders can undertake the extraordinarily complicated job of leading a country without their full mental faculties and sometimes manage to be moderately successful. It examines why society tolerates their actions for so long and even attempts to put a façade of normalcy on rulers, despite everyone knowing that they are mentally unstable. The book also explores whether insane rulers are a relic of the age of monarchs and will die out in the age of democracy or if they will continue to plague nations in the twenty-first century.

Finally, as many armchair psychologists question the mental health of Donald Trump and other populist politicians in the United States and Europe, all but diagnosing them with mental illness, this book sets to show that truly insane rulers are categorically different in the ways they endanger their population.

“A timely and salient wake-up call. At once an entertaining history lesson and cautionary tale, Scott Rank’s book chronicles a host of unhinged and megalomaniacal rules and assesses their relative madness. Much food for thought and reflection here.” —Buddy Levy, author of Labyrinth of Ice
“Dr. Rank writes in an engaging style that will make it hard for you to put the book down.” —James Early, professor of history at San Jacinto College

Scott Rank is the author of twelve history books and the host of two history podcasts, “History in Five Minutes,” which has over 130 episodes and 1.5 million downloads, and “History Unplugged,” which reached 5 million downloads in its first 18 months. He earned his doctorate in history at Central European University in Budapest, Hungary, in 2015, focusing on religion in the Ottoman Empire. Before going down the academic route he worked as a journalist in Istanbul and reported on human rights issues.