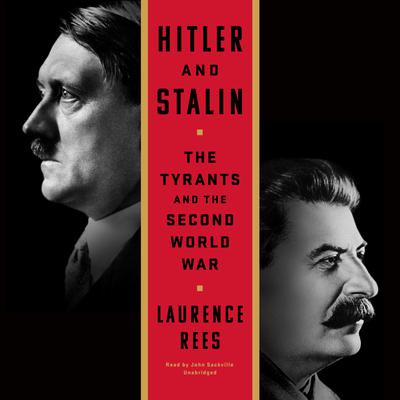 Hitler and Stalin: The Tyrants and the Second World War

An award-winning historian plumbs the depths of Hitler and Stalin's vicious regimes, and shows the extent to which they brutalized the world around them.

Two 20th century tyrants stand apart from all the rest in terms of their ruthlessness and the degree to which they changed the world around them. Briefly allies during World War II, Adolph Hitler and Josef Stalin then tried to exterminate each other in sweeping campaigns unlike anything the modern world had ever seen, affecting soldiers and civilians alike. Millions of miles of Eastern Europe were ruined in their fight to the death, millions of lives sacrificed.

Laurence Rees has met more people who had direct experience of working for Hitler and Stalin than any other historian. Using their evidence he has pieced together a compelling comparative portrait of evil, in which idealism is polluted by bloody pragmatism, and human suffering is used casually as a political tool. It's a jaw-dropping description of two regimes stripped of moral anchors and doomed to destroy each other, and those caught up in the vicious magnetism of their leadership.

Laurence Rees has won the British Book Award for History Book of the Year 2006 for his international bestseller Auschwitz: The Nazis and the ‘Final Solution’. His career as a writer and filmmaker, focusing on the Nazis and World War II, stretches back nearly twenty years and includes the acclaimed television series Nazis: A Warning from History, War of the Century, Horror in the East, and, most recently, Auschwitz: The Nazis and the ‘Final Solution’. The body of work has won him a myriad of awards including a BAFTA, a Grierson Award, and an international Documentary Award. He was educated at Solihull School and Oxford University and is Creative Director of BBC TV History programs.