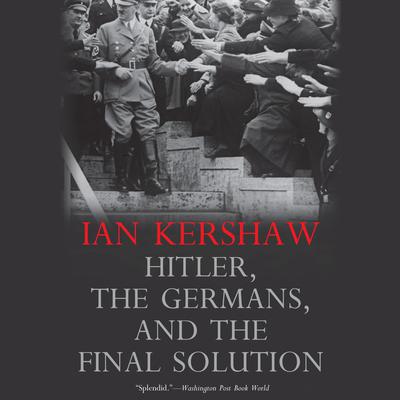 Hitler, the Germans, and the Final Solution

This book is the culmination of more than three decades of meticulous historiographic research on Nazi Germany by one of the period’s most distinguished historians. The volume brings together the most important and influential aspects of Ian Kershaw’s research on the Holocaust for the first time. The writings are arranged in three sections―Hitler and the Final Solution, popular opinion and the Jews in Nazi Germany, and the Final Solution in historiography―and Kershaw provides an introduction and a closing section on the uniqueness of Nazism.

Kershaw was a founding historian of the social history of the Third Reich, and he has throughout his career conducted pioneering research on the societal causes and consequences of Nazi policy. His work has brought much to light concerning the ways in which the attitudes of the German populace shaped and did not shape Nazi policy. This volume presents a comprehensive, multifaceted picture both of the destructive dynamic of the Nazi leadership and of the attitudes and behavior of ordinary Germans as the persecution of the Jews spiraled into total genocide.

Ian Kershaw is the author of several books, including Fateful Choices; Making Friends with Hitler, which won the Elizabeth Longford Prize for Historical Biography; and the definitive two-volume biography of Hitler, Hitler 1889–1936: Hubris and Hitler 1936–1945: Nemesis. The first volume was shortlisted for the Whitbread Biography Award and the Samuel Johnson Prize for Nonfiction, and the second volume won the Wolfson Literary Award for History and the inaugural British Academy Prize.