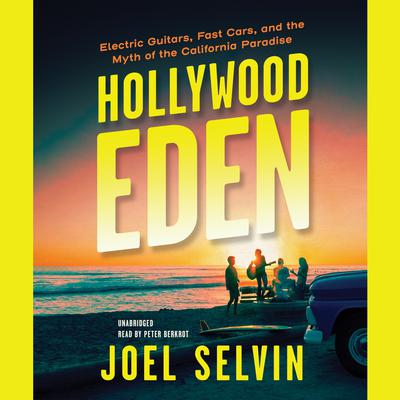 Hollywood Eden: Electric Guitars, Fast Cars, and the Myth of the California Paradise

From the Beach Boys and Jan & Dean to the Byrds and the Mamas & the Papas, acclaimed music journalist Joel Selvin tells the story of a group of young artists and musicians who came together at the dawn of the 1960s to create the lasting myth of the California dream.

From surf music to hot-rod records to the sunny pop of the Beach Boys and the Mamas & the Papas, Hollywood Eden captures the fresh blossom of a young generation who came together in the epic spring of the 1960s to invent the myth of the California Paradise. Central to the story is a group of sun-kissed teens from the University High School class of 1959—a class that included Jan & Dean, Nancy Sinatra, and future members of the Beach Boys—who came of age in Los Angeles at the dawn of a new golden era when anything seemed possible. These were the people who created the idea of modern California for the rest of the world. From the Beach Boys’ “California Girls” to the Mamas & the Papas’ “California Dreamin’,” they crafted an image of the West Coast as the promised land—a sun-dappled vision of an idyllic life in the sand and surf.

But their own private struggles belied the paradise portrayed in their music. What began as a light-hearted frolic under sunny skies ended up crashing down to earth just a few short but action-packed years later, as, one by one, each met their destinies head-on.

Compelling, evocative, and ultimately tragic, Hollywood Eden travels far beyond the music into the desires of the human heart and the price of living out a dream. A rock ’n’ roll opera loaded with violence, deceit, intrigue, low comedy, and high drama, it tells the story of a group of young artists and musicians who bumped heads, crashed cars, and ultimately flew too close to the sun.

“Vivid look at the burgeoning Los Angeles rock-and-roll scene of the late 1950s and early ’60s…Selvin’s depth of knowledge is impressive and his enthusiasm contagious.” —Kirkus Reviews
“My life back in those days was truly “fun fun fun” and Hollywood Eden beautifully captures our Fifties and Sixties California music scene. Please don’t change a word!” —Bruce Johnston, member of the Beach Boys
“Hollywood Eden is a keeper! Startlingly moving, it features a cast of somehow sympathetic characters who are all looking for a fast buck, some luck of the draw, or intimations of immortality. I knew full well most of the subjects of this tumultuous time; I was also there in a hedge-row cameo. So I read the book through and through. I warrant every word of it is true.” —Van Dyke Parks, composer, songwriter, and lyricist of Brian Wilson’s renowned Smile album
“Hollywood Eden is a detailed look at the hugely influential California music scene just before the arrival of folk rock and psychedelic music—a vital link in the chronicles of the American popular song. I found it fascinating; I love the book.” —Linda Ronstadt, vocalist, songwriter, and author of Simple Dreams
“Those of us who grew up in the Darwinian slaughterhouse of New Jersey couldn’t have imagined the paradise so accurately described in Hollywood Eden. Through the years I became familiar with most of the characters in this book, yet I learned something new on every page. Joel Selvin’s special gift is putting you in the room to witness these unlikely events that became essential Rock History.” —Stevie Van Zandt, musician, actor, and syndicated radio host of Little Steven’s Underground Garage

Joel Selvin is an award-winning journalist and music critic who covered pop music for the San Francisco Chronicle for over thirty-five years. His writing has appeared in Rolling Stone, the Los Angeles Times, Billboard, and Melody Maker, and he has contributed liner notes to dozens of recorded albums. He is also the bestselling author of over a dozen books about pop music, including Fare Thee Well: The Final Chapter of the Grateful Dead’s Long, Strange Trip; Altamont: The Rolling Stones, the Hells Angels, and the Inside Story of Rock’s Darkest Day; and Here Comes the Night: The Dark Soul of Bert Berns and the Dirty Business of Rhythm and Blues.