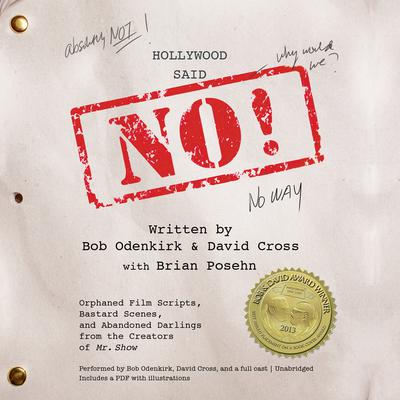 The creative geniuses behind HBO's classic sketch comedy Mr. Show are back with a collection of hilarious, never-before-seen scripts that may just have been too good for Hollywood.

It's hard to write a film. It's even harder to get that film made. So over the years, when Hollywood has said "No!" to actor-writer-comedians Bob Odenkirk and David Cross, the two have simply moved on to other projects and continued living their lives. But what if those scripts were actually hilarious? What if they deserved to see the light of day? What if Hollywood was just plain wrong?

Hollywood Said No! includes the full-length, never-before-seen scripts for Bob and David Make a Movie and Hooray for America! They are all presented in a more readable manner than standard film scripts, and Bob and David Make a Movie has been fleshed out with brand-new storyboards by acclaimed artist Mike Mitchell, all drawn exclusively for this book. And because Bob and David love you, the book even includes a bonus section of orphaned sketch ideas from the Mr. Show days, suitable for performance by church groups that aren't all "koo-koo" about religion.

Wait, there's still more! The book will also include a section of "constructive" notes written by a "studio executive." And last but not least (well, possibly least), Bob and David (and Brian Posehn) will provide a section of reminiscences to add context and backstory on what went right and what went wrong.

Will you shout "Yes!" where Hollywood screamed "No!"? It doesn't matter; nobody can hear you.

“Sketch comedians Bob Odenkirk, David Cross, Brian Posehn, and a host of other people chip in to make this audio production a much richer experience than the book will ever be. Pulling together different material that Odenkirk and Cross have worked on over the years, they enact some amusing scripts and skits that fans of their HBO series, Mr. Show, will appreciate. Including other actors they’ve worked with makes the production that much more enjoyable and creative, and the use of sound effects and music enhances the experience…This is a fun listening experience for those who enjoy the ridiculous and the absurd.” —AudioFile

Bob Odenkirk has won two Emmy Awards for his work on Saturday Night Live and The Ben Stiller Show. He cocreated and starred in Mr. Show with Bob and David, which ran on HBO and has been called the American Monty Python. Odenkirk had a regular page in Vice magazine and has written short comic pieces for the New Yorker; directed the feature films Melvin Goes to Dinner, Let’s Go to Prison,and The Brothers Solomon; and had many memorable roles on television, most notably The Larry Sanders Show, Curb Your Enthusiasm, How I Met Your Mother, and The Office. Odenkirk has become known as Saul Goodman on Breaking Bad and the new spin-off, Better Call Saul.

David Cross, a stand-up comedian, has appeared on several television programs, including Mr. Show and Arrested Development. His book I Drink for a Reason was a New York Times bestseller. Though born in Atlanta, he is an avid Red Sox fan.