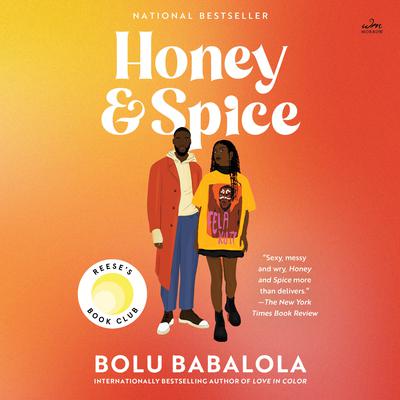 Honey and Spice: A Novel

A Los Angeles Times Pick of the Month

An Elle Magazine Pick of Best Books of Summer

A Shondaland Pick of the Month

"The ultimate summer romance . . . It’s got all the juiciest, most satisfying romance tropes, but in Babalola’s capable hands, the story feels fresh and unique." — The Cut, New York magazine

Introducing internationally bestselling author Bolu Babalola’s dazzling debut novel, full of passion, humor, and heart, that centers on a young Black British woman who has no interest in love and unexpectedly finds herself caught up in a fake relationship with the man she warned her girls about

Sharp-tongued (and secretly soft-hearted) Kiki Banjo has just made a huge mistake. As an expert in relationship-evasion and the host of the popular student radio show Brown Sugar, she’s made it her mission to make sure the women of the African-Caribbean Society at Whitewell University do not fall into the mess of “situationships”, players, and heartbreak. But when the Queen of the Unbothered kisses Malakai Korede, the guy she just publicly denounced as “The Wastemen of Whitewell,” in front of every Blackwellian on campus, she finds her show on the brink.

They’re soon embroiled in a fake relationship to try and salvage their reputations and save their futures. Kiki has never surrendered her heart before, and a player like Malakai won’t be the one to change that, no matter how charming he is or how electric their connection feels. But surprisingly entertaining study sessions and intimate, late-night talks at old-fashioned diners force Kiki to look beyond her own presumptions. Is she ready to open herself up to something deeper?

A gloriously funny and sparkling debut novel, Honey and Spice is full of delicious tension and romantic intrigue that will make you weak at the knees.

"A smart, sexy summer read, which hits your brain and your romance buttons in one shot." — Los Angeles Times

"A vibrant debut novel . . . Babalola is incisively funny, capturing the kick and sweetness of her title with her words." — Entertainment Weekly

“It’s messy, it’s sexy, and it’s a must-read.” —Cosmopolitan
“A smart, sexy summer read, which hits your brain and your romance buttons in one shot.” —Los Angeles Times
“Will have you laughing out loud and reconsidering first impressions.” —BuzzFeed
“Weruche Opia’s self-confident narration sings with a heady mix of feminine power and vulnerability…Opia weaves their interactions…through expertly delivered dialogue. British slang and Yoruba phrases round out this stellar performance. Winner of the AudioFile Earphones Award.” —AudioFile

Bolu Babalola is a British-Nigerian journalist, writer, and lover of love. While writing scripts for TV and film, she also works as a content creator, where she calls herself a “romcomoisseur.” This is her debut anthology.