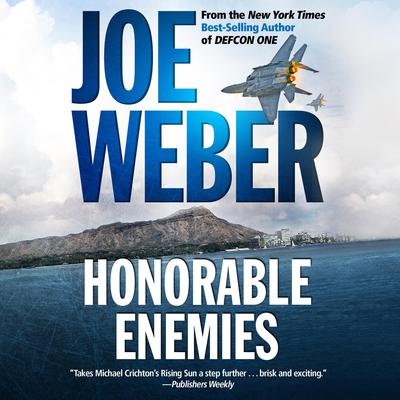 The beautiful tranquility of the Hawaiian afternoon is shattered when a cruise ship filled with Japanese tourists is comes under fire. Unbelievably, a civilian helicopter is strafing the ship with automatic weapons.

The shock waves from the tragic attack reach all the way to Washington and Tokyo. In retaliation for the attack, a group of American tourists is ambushed in Osaka, and then Japanese-Americans become targets across the United States. Relations between the U.S. and Japan rapidly deteriorate.

The only way to restore order and prevent a greater conflict is to find out who is responsible for the initial attack—and why. This task is assigned to senior CIA operations officer Stephen Wickham and a Japanese-American FBI agent, Susan Nakamura. Their search leads them to a deadly conspiracy of enormous proportions . . . and reaching all the way to the highest levels of the U.S. and Japanese governments.

In Honorable Enemies, Joe Weber has formulated a chilling post-Cold War scenario, once again proving himself a master at portraying a frighteningly real near-future confrontation with our most powerful rival—Japan.

"Some writers get better with age: Weber is among them."—Library Journal

Joe Weber is a former fighter pilot who knows his subject well. His military thrillers are fast-paced, accurate, and as current as this morning’s headlines. His novels have appeared on the bestseller lists of the New York Times, Publishers Weekly, the Associated Press, and the Chicago Tribune and have been translated into Chinese, Japanese, Hebrew, Spanish, Polish, Russian, and Italian. Mr. Weber holds a master of science degree in aviation management and is an Airline Transport–rated pilot with over 10,500 hours of flight time in 43 different types of aircraft, ranging from aerobatic biplanes and high-performance military jets to four engine transports. He served in the United States Marine Corps from 1970–1975. A native of Enid, Oklahoma, he lives near Pensacola, Florida, with his wife.