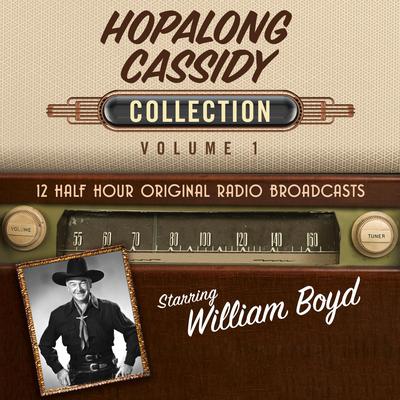 Fictional cowboy hero Hopalong Cassidy was created in 1904 by author Clarence E. Mulford in a series of short stories and novels based on the character. Beginning in 1935, William Boyd starred as Hoppy in 66 popular films. On screen, the white-haired Bill “Hopalong” Cassidy was dressed strikingly in all black, rode a white horse named “Topper” and thwarted dishonest characters that took advantage of honest citizens. By 1946, Hopalong Cassidy became the first network Western television series. Capitalizing on the success of the films and TV series, Mutual radio began broadcasting a weekly radio version in 1950 starring William Boyd as Hoppy with Andy Clyde as his comedic sidekick “California Carlson.” By 1950 more than 100 companies were manufacturing $70 million of Hopalong Cassidy product, including children’s dinnerware, lunch-boxes, pillows, roller skates, soap, wristwatches and pocketknives.

This collection features 12 of his greatest radio adventures!