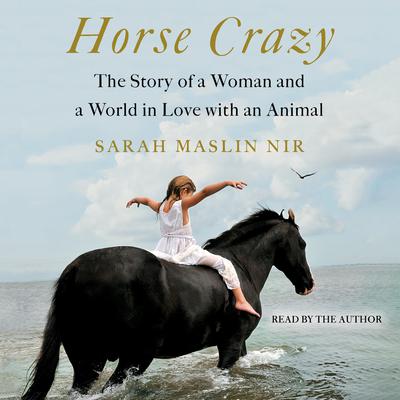 Horse Crazy: The Story of a Woman and a World in Love with an Animal

In the bestselling tradition of works by such authors as Susan Orlean and Mary Roach, a New York Times reporter and Pulitzer Prize finalist explores why so many people—including herself—are obsessed with horses.

It may surprise you to learn that there are over seven million horses in America—even more than when they were the only means of transportation—and nearly two million horse owners. Acclaimed journalist and avid equestrian Sarah Maslin Nir is one of them; she began riding horses when she was just two years old and hasn’t stopped since. Horse Crazy is a fascinating, funny, and moving love letter to these graceful animals and the people who—like her—are obsessed with them. It is also a coming-of-age story of Nir growing up an outsider within the world’s most elite inner circles, and finding her true north in horses.

Nir takes us into the lesser-known corners of the riding world and profiles some of its most captivating figures. We meet Monty Roberts, the California trainer whose prowess earned him the nickname “the man who listens to horses”; George and Ann Blair, the African-American husband and wife who run a riding academy for inner city youth on a tiny island in the middle of Manhattan’s East River; and Francesca Kelly, a wealthy London socialite whose love for an Indian nobleman shaped her life’s mission: to rescue an endangered Indian breed of horse and bring them—illegally—to America.

Woven into these compelling character studies, Nir shares her own moving personal narrative. She details her father’s harrowing tale of surviving the Holocaust, and describes an enchanted but deeply lonely upbringing in Manhattan, where horses became her family. She found them even in the middle of the city, in a stable disguised in an old townhouse and in Central Park, when she chased down truants as an auxiliary mounted patrol officer. And she speaks candidly of how horses have helped her overcome heartbreak and loss.

Infused with heart and wit, and with each chapter named after a horse Nir has loved, Horse Crazy is an unforgettable blend of beautifully written memoir and first-rate reporting.

“Lyrical, lovely, and thoroughly engaging, Horse Crazy is that rare book that looks inward and outward. It harnesses Nir’s smart reporting about the world of equine devotion with a reflection on her lifelong love of horses, and the result is wonderful.” —Susan Orlean, New York Times bestselling author
“Sarah Maslin Nir is one of the sharpest, most compassionate and talented writers out there today. Whether on the pages of the Times or here in this book, you will enjoy consuming her every word.” —Alec Baldwin