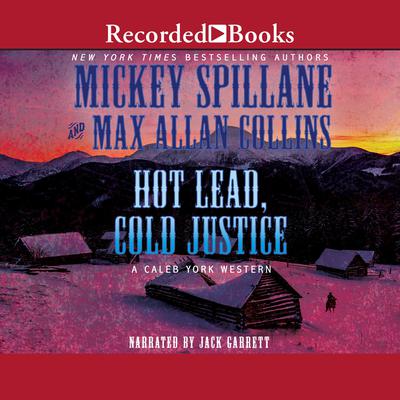 Legendary crime writer Mickey Spillanes celebrated tin-star hero Caleb York returns in the explosive Western saga by New York Times bestselling author Max Allan Collins. This time, the revered New Mexico gunhand unloads his .44 in a brewing storm brutal enough to freeze the blood. A killer blizzard sweeping across the Southwest threatens the livelihoods of everyone in the town of Trinidad. But its two gunshots that fell Sheriff Caleb Yorks unlucky deputy. As sure as the blood pooling in the snow, York knows it was a case of mistaken identity. The bullets were meant for him. Its the first nasty step in a plan rustled up by former Quantrills Raider Luke Burn Em Burnhameliminate the law, corral a team to rob a bank in booming Las Vegas, New Mexico, then lay low. With a treacherous local merchant for cover, and York out of the picture, all theyll have to do is wait for the calm. Then they get wind of one little hitch: not only is York still alive, but hes gunning for justiceand revenge. As the winter weather bears down, the stir-crazy outlaws aim to finish what they startedtake down York and disappear into the blinding storm. As a chilling cat-and-mouse begins, York isnt about to let Burnham and his damnable gang get away. Itd be a cold day in hell if he did.