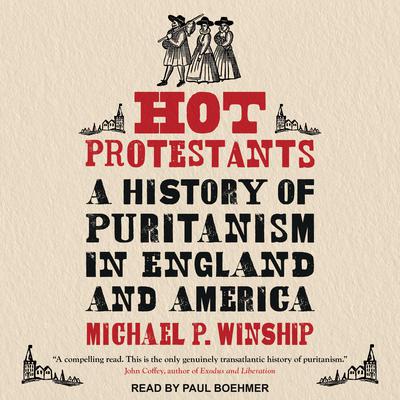 Hot Protestants: A History of Puritanism in England and America

On fire for God—a sweeping history of puritanism in England and America.

Begun in the mid–sixteenth century by Protestant nonconformists keen to reform England's church and society while saving their own souls, the puritan movement was a major catalyst in the great cultural changes that transformed the early modern world. Providing a uniquely broad transatlantic perspective, this groundbreaking volume traces puritanism's tumultuous history from its initial attempts to reshape the Church of England to its establishment of godly republics in both England and America and its demise at the end of the seventeenth century.

Shedding new light on puritans whose impact was far–reaching as well as on those who left only limited traces behind them, Michael Winship delineates puritanism's triumphs and tribulations and shows how the puritan project of creating reformed churches working closely with intolerant godly governments evolved and broke down over time in response to changing geographical, political, and religious exigencies.

Hot Protestants is a fine work of scholarship, written in a gracefully understated style, and is among the fairest and most readable accounts of the glorious failure that was trans-Atlantic Puritanism. —Barton Swaim, Wall Street Journal

Michael P. Winship is E. Merton Coulter Professor in the Department of History at the University of Georgia. He is the author of numerous books, including Godly Republicanism: Puritans, Pilgrims, and a City on a Hill. He lives in Athens, Georgia.