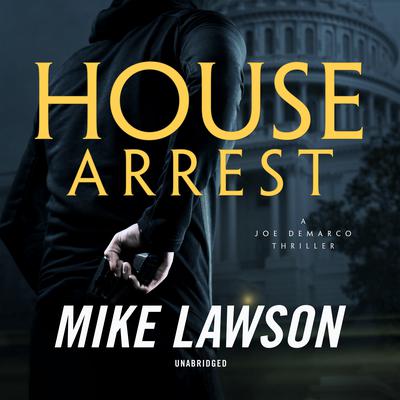 A Booklist Editors’ Choice of Best Audiobooks of the Year

In the thirteenth book in Mike Lawson’s celebrated series, Joe DeMarco finds himself on the wrong side of an investigation―in the wake of a political assassination, he’s been framed as the killer.

As the fixer for Congressman John Mahoney in Washington, DC, Joe DeMarco has had to bend and break the law more than a few times. But when Representative Lyle Canton, House Majority Whip, is found shot dead in his office in the US Capitol and DeMarco is arrested for the murder, DeMarco knows he’s been framed. Locked up in the Alexandria Jail awaiting trial, he calls on his enigmatic friend Emma, an ex–DIA agent, to search for the true killer.

Emma’s investigation leads her to Sebastian Spear, the ruthless and competitive CEO of the multi-billion-dollar Spear Industries. Spear had a motive for killing Lyle Canton: Canton’s wife, Jean, had once been Spear’s high school sweetheart and the one true love of his life―until Canton won her over. Now Jean was dead, killed in a car crash while driving drunk, and Spear blamed Canton for the accident. But the case the FBI has built against DeMarco is airtight, and not a single piece of evidence points to the grieving CEO. Using her cunning and her DC connections, Emma sets out to prove that Spear has been using fixers of his own.

Featuring crimes of passion, corporate corruption, and partisan feuds, House Arrest is a gripping, timely political thriller, and one of Lawson’s best books yet.

“Lawson has a true insider’s insight about real-world spinelessness, venality, and corruption that have taken the place of moral courage and true leadership on Capitol Hill…a fine ear for dialogue…[and] a good eye for irony.” —Washington Times
“Lawson’s terrific eleventh Joe DeMarco thriller…Knowing he’s been framed, Joe turns to his former DIA agent friend, Emma, to prove his innocence…While there’s no doubt that Emma will prevail, she faces enough difficulties to make the outcome suspenseful.” —Publishers Weekly (starred review)
“Narrator Joe Barrett’s exceptional performance makes this a book and a series not to be missed…Barrett is right at home with the familiar characters and sly tone, as he expertly conveys every nuance and snide comment. His quick reading pace, mastery of the snappy dialog, and clever asides propel this comic political thriller. Barrett is known for his skill with authentic accents, and that is evident in his portrayal of the Russian characters…One needn’t be familiar with the series to step right in here.” —Booklist (starred audio review)
“First-rate…with a clever cliff-hanger ending. This book proves beyond a doubt the Strand magazine’s recent assertion that Lawson’s series is the closest thing on the market today to the witty political thrillers of the late, great Ross Thomas.” —Booklist (starred review)
“DeMarco, who has a law degree but has never practiced law, gets to see a whole new side of the legal system when he’s expertly framed for murder…Lawson’s matter-of-fact tone, walking a fine line between satire and reportage, propels his tale forward…[and] provides the perfect conclusion.” —Kirkus Reviews