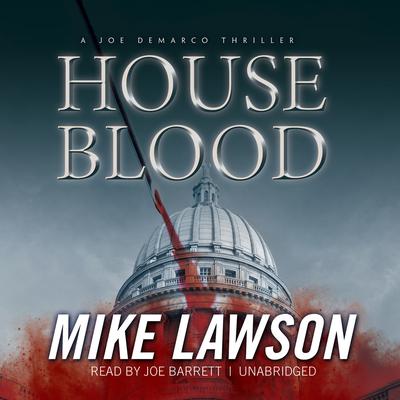 With his series of thrillers starring congressional fixer Joe DeMarco, Mike Lawson has earned a reputation as a master of political intrigue and one of the best writers focusing on the behind-the-scenes action of our nation's capital. In House Blood, Lawson introduces us to Orson Mulray, CEO of Mulray Pharma, a cold and calculating man obsessed with profit and prestige. Mulray believes he has discovered a drug that could prevent a previously incurable disease. It could be the salvation of millions of people and earn him billions of dollars. But the drug needs to be tested on human subjects, and Mulray needs more than blood samples—he needs autopsy results.

When DeMarco is asked to look into the murder conviction of a lobbyist, he has other worries on his mind: his boss is no longer Speaker, his girlfriend has left him, and his friend Emma may be dying. DeMarco doesn't expect to free the lobbyist—much less become the target of two of the most callous killers he and Emma have ever encountered.

The seventh book in this celebrated series is a rollicking ride to Uganda, Peru, and beyond. Lawson expertly commands Washington politics, mercenaries, and the pharmaceutical industry for a juicy story full of lifelike characters and thrilling action.

“A what-happens-next, edge-of-your-seat thriller, told with the author’s clear prose and storytelling skills. I know that Mike Lawson has methodically grown a loyal base of fans, but I think that his consistent excellence needs to be more universally acknowledged. This is a very ambitious book, and I’m hopeful it will be the one that propels him into bestsellerdom. He certainly deserves it, and his publisher does as well.” —Deadly Pleasures
“While Lawson provides a vivid picture of what it takes to get a drug approved and how high the stakes can be both politically and financially, the book’s main appeal is everyman DeMarco, who’d rather watch college basketball on TV than work. As ever, he’s good at tracking the bad guys—and it’s fun to watch him at it.” —Publishers Weekly
“The plot and pace are relentless, and the milieus of Congress, DC, and disaster relief seem knowingly presented. But character creation is Lawson’s greatest talent, and Fiona, her supersoldiers, and of course, the ever-cranky cynic, DeMarco, will rivet readers’ attention. A host of lesser characters are nearly as engaging. House Blood is so good it will move long-time political-thriller readers to recall the memorable characters and style of the late, great Ross Thomas.” —Booklist (starred review)
“[A] page-turner brimming with authentic Washington, DC, detail and distinctive, engaging characters. Even the bad guys are interesting.” —Library Journal