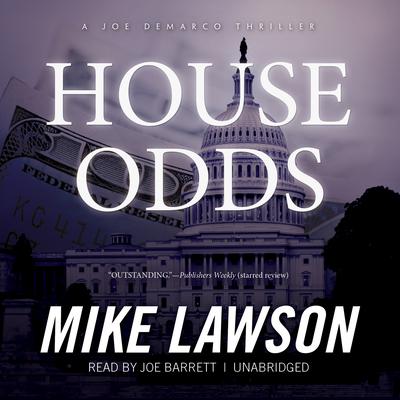 Washington fixer Joe DeMarco has been asked to handle a lot of difficult situations over the years for his boss, Congressman John Mahoney. But nothing has ever been quite so politically sensitive, or has hit so close to home, as the task Mahoney hands DeMarco in House Odds, the latest novel from critically acclaimed thriller writer Mike Lawson.

Mahoney's daughter, Molly, has been arrested and charged with insider trading. An engineer with a high-flying technology firm, she allegedly placed a half-million-dollar bet on one of the firm's clients. DeMarco's job is to clear Molly's name and keep his boss clean. But how did Molly get her hands on so much money to invest in the first place? Before long, DeMarco discovers that there's far more to Molly's case than meets the eye, and the risk to Mahoney is more than just a little political embarrassment. Featuring an extensive cast of mobsters and politicians, House Odds is a gripping tale of high-stakes scheming from one of today's best political thriller writers.

“Lawson rivets in House Odds, throwing Joe DeMarco—that engaging charmer you want to have your back—right into the rear corridors of Capitol Hill, the power deals, and yes, the mob gets involved. Like Joe, we wonder, as he raises the question—who really are the bad guys?” —Cara Black, New York Times bestselling author
“House Odds gives you a look at the sordid underbelly of Washington politics where you will meet crooked politicians, evil gangsters, and violent fixers mixed into a clever, original, fast-moving, and unpredictable plot. Enjoy.” —Phillip Margolin, New York Times bestselling author
“What a pleasure to read a book by a writer who gets everything right—the engaging protagonist, the fluid and often funny dialogue, the quick-paced and believable plot…Grade: A.” —Cleveland Plain Dealer on House Odds
“Mike Lawson has a deservedly strong reputation for his robust, bemused tales of DC intrigue, and House Odds doesn’t disappoint.” —Seattle Times
“Outstanding…As usual, the characters—notably an interesting mix of gangsters, who range from deadly to hilarious—matter more than the plot.” —Publishers Weekly (starred review)
“Odds favor a good time for the reader as Joe DeMarco faces his eighth case: a looming insider trading scandal with potentially fatal consequences…Funny lines, fiendishly complicated plotting, and swiftly and sharply etched characters make this installment one of the most enjoyable in the series.” —Kirkus Reviews
“Lawson has written another fine installment in his DeMarco series, filled with vividly drawn characters, a plot with more bends than the Mississippi River, a brisk pace, and a fine sense of inside-the-Beltway verisimilitude.” —Booklist
“House Odds held my attention from start to finish. It has all the essential elements of a crackling good thriller: a great character (political fixer Joe DeMarco), a spellbinding plot, and clean crisp prose.” —William Bernhardt, author of Capitol Conspiracy