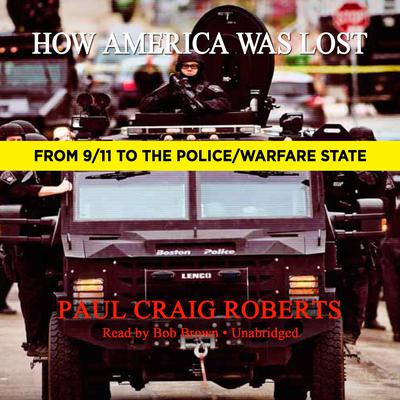 How America Was Lost: From 9/11 to the Police/Warfare State

Even as the view of America as a rogue state consolidates abroad, Americans appear largely bystanders at the spectacle of their government running amok. People forget the myriad instances of their government’s flouting of the Constitution and international legal norms—if they were ever aware of them in the first place—accepting to live in the increasingly pernicious “new normal” with little protest.

This remarkable anthology of columns documents and reminds us of the extraordinary developments that, in their accumulation, have led to the destruction of accountable and moral government in the United States.

How America Was Lost marks Roberts as one of the most prescient and courageous moral commentators in America today.

America’s fate was sealed when the public and the antiwar movement bought the government’s 9/11 conspiracy theory. The government’s account of 9/11 is contradicted by much evidence. Nevertheless, this defining event of our time, which has launched the United States on interminable wars of aggression and a domestic police state, is a taboo topic for investigation in the media. It is pointless to complain of war and a police state when one accepts the premise upon which they are based.

These trillion-dollar wars have created financing problems for Washington’s deficits and threaten the US dollar’s role as world reserve currency. The wars and the pressure that the budget deficits placed on the dollar’s value have put Social Security and Medicare on the chopping block. Former Goldman Sachs chairman and US Treasury Secretary Hank Paulson is after these protections for the elderly. Fed chairman Bernanke is also after them. The Republicans are after them as well. These protections are called “entitlements” as if they are some sort of welfare that people have not paid for in payroll taxes all their working lives.

With over 21 percent unemployment as measured by the methodology of 1980, with American jobs, GDP, and technology having been given to China and India, with war being Washington’s greatest commitment, with the dollar overburdened with debt, with civil liberty sacrificed to the “war on terror,” the liberty and prosperity of the American people have been thrown into the trash bin of history.

The militarism of the US and Israeli states, and Wall Street and corporate greed, will now run their course.

Paul Craig Roberts was assistant secretary, US Treasury in the Reagan administration, associate editor and columnist for the Wall Street Journal, columnist for Business Week, the Scripps Howard News Service, and Creators Syndicate. He has testified before Congress on thirty occasions. He was awarded the US Treasury’s Meritorious Service Award as well as the French Legion of Honor by the Mitterrand government. Roberts has held academic appointments in six universities, including Stanford and the William E. Simon Chair in Political Economy, Center for Strategic and International Studies, Georgetown.