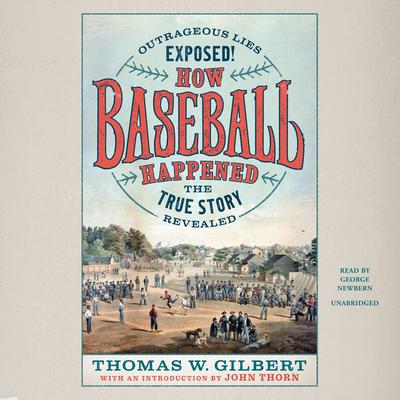 Winner of the 2020 Casey Award

The fascinating, true, origin story of baseball—how America’s first great sport developed and how it conquered a nation

Baseball’s true founders don’t have plaques in Cooperstown. The founders were the hundreds of uncredited amateurs—ordinary people—who played without gloves, facemasks, or performance incentives in the middle decades of the nineteenth century. Unlike today’s pro athletes, they lived full lives outside of sports. They worked, built businesses, and fought against the South in the Civil War.

But that’s not the way the story has been told. The wrongness of baseball history can be staggering. You may have heard that Abner Doubleday or Alexander Cartwright invented baseball. Neither did. You may have been told that a club called the Knickerbockers played the first baseball game in 1846. They didn’t. You have read that baseball’s color line was uncrossed and unchallenged until Jackie Robinson in 1947. Nope. You may have heard Cooperstown, Hoboken, or New York City called the birthplace of baseball, but not Brooklyn. Yet Brooklyn was the home of baseball’s first fans, the first ballpark, the first statistics—and modern pitching.

Baseball was originally supposed to be played, not watched. This changed when crowds began to show up at games in Brooklyn in the late 1850s. We fans weren’t invited to the party; we crashed it. Professionalism wasn’t part of the plan either, but when an 1858 Brooklyn versus New York City series accidentally proved that people would pay to see a game, the writing was on the outfield wall.

When the first professional league was formed in 1871, baseball was already a fully formed modern sport with championships, media coverage, and famous stars. Professional baseball invented an organization, but not the sport itself. Baseball’s amazing amateurs had already done that.

Thomas W. Gilbert’s history is for baseball fans and anyone fascinating by origin stories and American culture.

“Gilbert digs deep into baseball history to separate fact from fiction when it comes to the origins of the American pastime…originated by a group of amateurs in New York City.”“ —New York Post
“Explains how almost all conventional wisdom about baseball’s origins and formative years is wrong. A delightful look at a young nation creating a pastime that was love from the first crack of the bat.” —Wall Street Journal
“How Baseball Happened is a brilliant new approach to our game, and its author tells a hundred stories you haven’t heard before.” —John Thorn, official historian of Major League Baseball
“A lively and often funny account of how baseball became THE national sport. At once irreverent and loving, Gilbert explodes baseball’s founding myths while painting a rich portrait of a forgotten America.” —Robert Kagan, New York Times bestselling author
“This is a tart and funny trip through the raucous and aspiring culture that shaped baseball, with its volunteer firefighters, urban professionals, bloodstained butchers, and brawling gamblers.” —Edward Achorn, author of Every Drop of Blood

Thomas W. Gilbert is the author of many baseball books, including Baseball and the Color Line, Roberto Clemente, and Playing First. His book How Baseball Happened won the 2020 Casey Award for Best Baseball Book of the Year. From his Greenpoint, Brooklyn, stoop he can throw a baseball to the former site of the Manor House tavern, where members of the Eckford Baseball Club enjoyed a post-game drink or two in the 1850s.