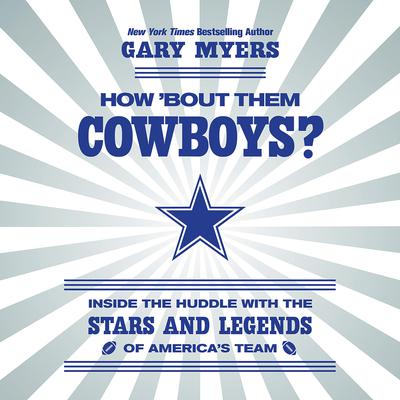 How ‘Bout Them Cowboys?: Inside the Huddle with the Stars and Legends of America’s Team

Welcome to Jerryworld and an all-access pass to the most valuable franchise in the NFL, the Dallas Cowboys.

Many books have been written about the Cowboys, but there’s never been an account like this one. How ’Bout Them Cowboys? tells the unofficial history of the NFL’s most successful franchise, with special access to its outspoken owner, Jerry Jones, his son Stephen and daughter Charlotte, and dozens of interviews of current players, coaches, and characters from across Cowboy Nation. While tracking the successes and controversies of Dak Prescott and Zeke Elliott on and off the field, How ’Bout Them Cowboys? remembers the legends of previous generations, and explains why the star on the helmet has become iconic, and how a little team from North Texas has evolved into a global $5 billion brand.

Primed for their make-or-break 2018 season, How ’Bout Them Cowboys? delivers a fun and surprising account of America’s team, its greatest celebrities, its mercurial management, the vicious rivalries, and the enduring saga that makes this the most popular and polarizing team in sports.

Gary Myers is the NFL columnist for the New York Daily News. He has authored three books: The Catch (2009), a look at the iconic 1981 NFC Championship Game between the Cowboys and 49ers; Coaching Confidential (2012), which details the pressures of being an NFL head coach; and, the New York Times bestseller Brady vs. Manning (2015), an inside look at the greatest rivalry in NFL history. Myers has been covering the NFL since 1978. He was a member of the cast of HBO’s Inside The NFL and the YES Network’s This Week in Football. He is voter for the Pro Football Hall of Fame and is a part-time professor at Syracuse University.