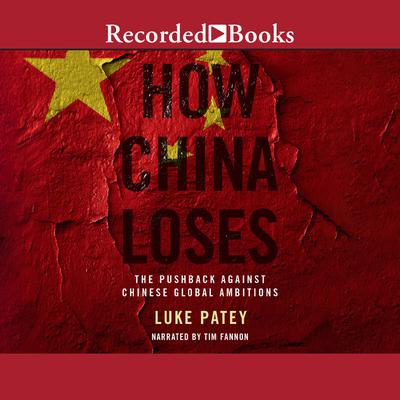 How China Loses: The Pushback against Chinese Global Ambitions

A critical look at how the world is responding to China's rise, and what this means for America and the world. China is advancing its own interests with increasing aggression. From its Belt and Road Initiative linking Asia and Europe, to its ""Made in China 2025"" strategy to dominate high-tech industries, to its significant economic reach into Africa and Latin America, the regime is rapidly expanding its influence around the globe. Many fear that China's economic clout, tech innovations, and military power will allow it to remake the world in its own authoritarian image. But despite all these strengths, a future with China in charge is far from certain. Rich and poor, big and small, countries around the world are recognizing that engaging China produces new strategic vulnerabilities to their independence and competitiveness. How China Loses tells the story of China's struggles to overcome new risks and endure the global backlash against its assertive reach. Combining on-the-ground reportage with incisive analysis, Luke Patey argues that China's predatory economic agenda, headstrong diplomacy, and military expansion undermine its global ambitions to dominate the global economy and world affairs. In travels to Africa, Latin America, East Asia and Europe, his encounters with activists, business managers, diplomats, and thinkers reveal the challenges threatening to ground China's rising power. At a time when views are fixated on the strategic competition between China and the United States, Patey's work shows how the rest of the world will shape the twenty-first century in pushing back against China's overreach and domineering behavior. Even before the COVID-19 pandemic, many countries began to confront their political differences and economic and security challenges with China and realize the diversity and possibility for cooperation in the world today.

Luke Patey is a senior researcher at the Danish Institute for International Studies and Lead Senior Research Fellow at the Oxford Institute for Energy Studies, University of Oxford. His articles have appeared in the New York Times, Financial Times, The Guardian, The Hindu, Foreign Affairs, and Foreign Policy.