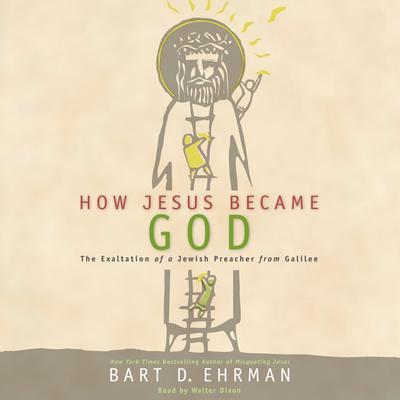 How Jesus Became God: The Exaltation of a Jewish Preacher from Galilee

One of Audible’s Best Audiobooks of 2014: The great courses

The claim at the heart of the Christian faith is that Jesus of Nazareth was, and is, God. But this is not what the original disciples believed during Jesus’s lifetime—and it is not what Jesus claimed about himself. How Jesus Became God tells the story of an idea that shaped Christianity, and of the evolution of a belief that looked very different in the fourth century than it did in the first.

A master explainer of Christian history, texts, and traditions, Ehrman reveals how an apocalyptic prophet from the backwaters of rural Galilee crucified for crimes against the state came to be thought of as equal with the one God Almighty, Creator of all things. But how did he move from being a Jewish prophet to being God? In a book that took eight years to research and write, Ehrman sketches Jesus’s transformation from a human prophet to the Son of God exalted to divine status at his resurrection. Only when some of Jesus’s followers had visions of him after his death—alive again—did anyone come to think that he, the prophet from Galilee, had become God. And what they meant by that was not at all what people mean today.

Written for secular historians of religion and believers alike, How Jesus Became God will engage anyone interested in the historical developments that led to the affirmation at the heart of Christianity: Jesus was, and is, God.

“How did ancient monotheism allow the One God to have a ‘son’? Bart Ehrman tells this story, introducing the reader to a Jewish world thick with angels, cosmic powers, and numberless semi-divinities. How Jesus Became God provides a lively overview of Nicea’s prequel.” —Paula Fredriksen, distinguished visiting professor, the Hebrew University of Jerusalem, and author of Jesus of Nazareth, King of the Jews

Bart D. Ehrman is the author or editor of more than thirty books, including several New York Times bestsellers. He is a professor of religious studies at the University of North Carolina, Chapel Hill, and a leading authority on the New Testament and the history of early Christianity. He has been featured in Time, the New Yorker, and the Washington Post and has appeared on NBC, CNN, The Daily Show with Jon Stewart, The History Channel, National Geographic, BBC, major NPR shows, and other top print and broadcast media outlets.