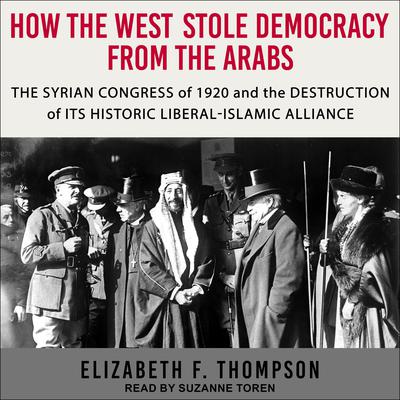 How the West Stole Democracy from the Arabs: The Syrian Congress of 1920 and the Destruction of its Historic Liberal-Islamic Alliance

When Europe's Great War engulfed the Ottoman Empire, Arab nationalists rose in revolt against the Turks. The British supported the Arabs’ fight for an independent state and sent an intelligence officer, T. E. Lawrence, to join Prince Faisal, leader of the Arab army and a descendant of the Prophet. In October 1918, Faisal, Lawrence, and the Arabs victoriously entered Damascus, where they declared a constitutional government in an independent Greater Syria.

At the Paris Peace Conference, Faisal won the support of President Woodrow Wilson. However, other Entente leaders at Paris—and later San Remo—schemed against the Arab democracy, which they saw as a threat to their colonial rule. On March 8, 1920, the Syrian-Arab Congress declared independence and crowned Faisal king of a "representative monarchy." Rashid Rida, a leading Islamic thinker of the day, led the constituent assembly to establish equality for all citizens, including non-Muslims, under a full bill of rights.

But France and Britain refused to recognize the Damascus government and instead imposed a system of mandates on the Arab provinces of the defeated Ottoman Empire. Under such a mandate, the French invaded Syria in April 1920, crushing the Arab government and sending Faisal and Congress leaders in flight to exile.