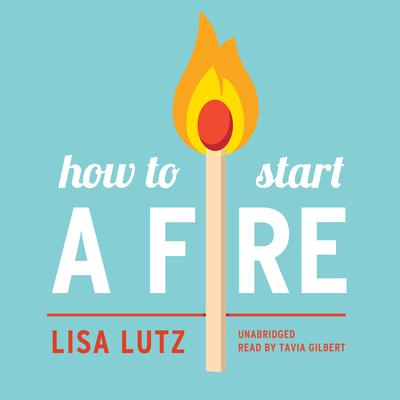 How to Start a Fire

A BookPage Top Pick in Popular Fiction for May 2015

From a New York Times bestselling author comes a story of unexpected friendship—three women thrown together in college who grow to adulthood united and divided by secrets, lies, and a single night that shaped all of them.

When UC Santa Cruz roommates Anna and Kate find passed-out Georgianna Leoni on a lawn one night, they wheel her to their dorm in a shopping cart. Twenty years later, they gather around a campfire on the lawn of a New England mansion. What happens in between—the web of wild adventures, unspoken jealousies, and sudden tragedies that alter the course of their lives—is charted with sharp wit and aching sadness in this meticulously constructed novel.

Anna, the de facto leader, is fearless and restless—moving fast to stay one step ahead of her demons. Quirky, contemplative Kate is a natural sidekick but a terrible wingman (“If you go home with him, might I suggest breathing through your mouth”). And then there’s George: the most desired woman in any room, and the one most likely to leave with the worst man.

Shot through with the crackling dialogue, irresistible characters, and propulsive narrative drive that make Lutz’s books so beloved, How to Start a Fire pulls us deep into Anna, Kate, and George’s complicated bond and pays homage to the abiding, irrational love we share with the family we choose.

“A tale of female friendship and the families we choose for ourselves, How to Start a Fire will keep you captivated from beginning to end.” —Town & Country, One of the Best Beach Reads for 2015
“The story delivers staggering insights into the consequences of choice, no matter how insignificant a moment may seem at the time, as well as the meaning of forgiveness and the ways in which friends can become more like family than our own blood relations—for better or for worse.” —Globe & Mail (Toronto)
“A great choice for fans of women’s lit and anyone who enjoys books about female friendship.” —Pensacola News Journal
“[A] glorious exploration of friendship…The author portrays three fully drawn, flawed, and compelling women with fresh insight into the mysterious terrain of female friendships—a mix of shared experiences, affection, empathy, jealousy, anger, and love.” —Publishers Weekly (starred review)
“The characters are marvelous—each woman, despite having some over-the-top peculiarities about her, is relatable and fully dimensional.” —Booklist (starred review)
“Delivered in short chapters that move between the present and the past, the book shows readers results before actions, building a sense of intrigue up to the singular event that changed everything. The main characters are developed through vignettes in various stages of their lives, showing that they are as realistically flawed as they are emotionally engaging.” —Library Journal (starred review)
“In this funny and keenly observed novel, Lutz shows a deft hand for capturing female friendship and its blend of fierce devotion, jealousy, and acceptance.” —BookPage
“As she skillfully juggles the voices of three central characters, Tavia Gilbert adds this title to her long list of excellent performances. She creates a bold Anna, a childlike Kate, and a languid George and then leads the listener through their experiences together at a headlong pace…Gilbert’s delivery is often hilarious; sometimes the characters’ voices just spark with humor and life…[an] entertaining and well-performed production.” —AudioFile
“Few books have so expertly captured the intricacies and complexities of female friendship. Whip smart and cunning, deeply funny and profoundly moving, Lisa Lutz’s How to Start a Fire is a knockout.” —Megan Abbott, Edgar Award–winning author

Lisa Lutz is the New York Times bestselling author of the the Spellman Files series and coauthor of Heads You Lose with David Hayward. Lutz has won the Alex Award and has been nominated for the Edgar Award for Best Novel. She lives in upstate New York.