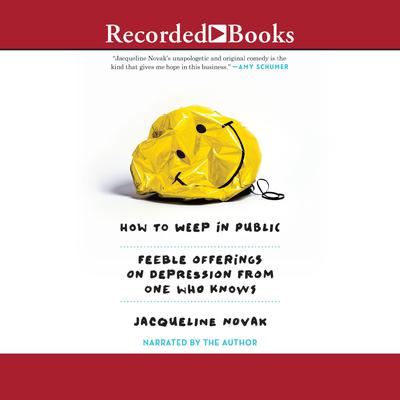 How to Weep in Public: Feeble Offerings on Depression from One Who Knows

In her hilarious memoir-meets-guide-to-life, comedian (and professional depressive) Jacqueline Novak reveals the hidden pleasures of depression, advises readers on how to make the most of a cat haircovered life, and helps them summon the strength to shed that bathrobe and face the world. Exhausted? Run down? Filled with a vague sense of ennui, an occasional twinge of regret, or a hell of a lot of mood stabilizers? Then this is the book for you. How to Weep in Public is both a tongue-in-cheek advice guide (from a person who has no business giving advice to anyone!) and one womans breathless journey to consistently put on pants, or at least get out of bed in the morning. Beginning with her earliest blue moments of infancy and hopscotching through her exploration of the world of pharmaceuticals before bounding right back to her parents couch, Jacqueline Novak will introduce you to the ABCs (Adderall! Benzos! Catatonia!) of depression and reveal, funnily enough, that a lot can happen even when youre standing still. Or, as it happens, lying down. Whether youre coping with the occasional down day or thrive fully in Picassos Blue Period, How to Weep in Public is the perfect place to regroup between those nagging Tony Robbins tapes and that exhausting amount of leaning in. So sit back, relax, and let Jacqueline Novak teach you how to carpe depressem with the rest of them.