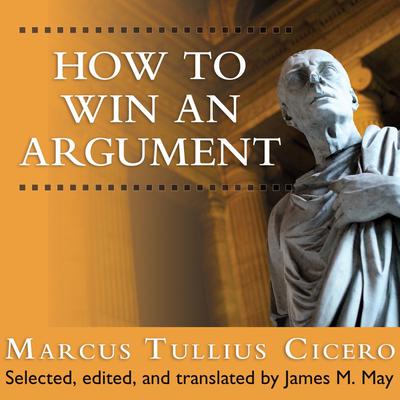 How to Win an Argument: An Ancient Guide to the Art of Persuasion

By Marcus Tullius Cicero
Edited and Translated by James M. May
Read by Simon Vance

All of us are faced countless times with the challenge of persuading others, whether we're trying to win a trivial argument with a friend or convince our coworkers about an important decision. Instead of relying on untrained instinct—and often failing as a result—we'd win more arguments if we learned the timeless art of verbal persuasion, rhetoric. How to Win an Argument gathers the rhetorical wisdom of Cicero from across his works and combines it with passages from his legal and political speeches to show his powerful techniques in action. The result is an enlightening and practical introduction to the secrets of persuasive speaking and writing—including strategies that are just as effective in today's offices, schools, courts, and political debates as they were in the Roman forum.

How to Win an Argument addresses proof based on rational argumentation, character, and emotion; the parts of speech; the plain, middle, and grand styles; how to persuade no matter what audience or circumstances you face; and more. Astonishingly relevant, this anthology of Cicero's rhetorical and oratorical wisdom will be enjoyed by anyone who ever needs to win arguments and influence people.

Marcus Tullius Cicero (106–43 BC), commonly known as Cicero, was a Roman statesman, philosopher, orator, and lawyer. Born into an aristocratic family, he studied law and served a term as consul in 63 BC. Following the assassination of Caesar in 44 BC, to which he was a witness, he argued in front of the senate for the restoration of the republic but was unsuccessful. In 43 BC, he was murdered on the orders of Mark Antony. Cicero’s works include philosophic writings, speeches made as a lawyer and a senator, and letters.